In a week where Newry company, STATSports, signed a deal with the IRFU to provide GPS tracking and performance monitoring technology, we take a look at the presence of technology in the preparation and monitoring of players.

The use of technology is not reserved for the senior men’s squad and huge advances have been made by incorporating sports-tech in the day to day training schedules of the Ladies, U-20’s, provincial, schools and club scene in Ireland over the past few years. The ultimate aim of using such tech is to gain a competitive advantage.

Technology is all about us. In fact, as each day passes, technology advances. With these advances, we should expect better performances – at least in a sporting sense. 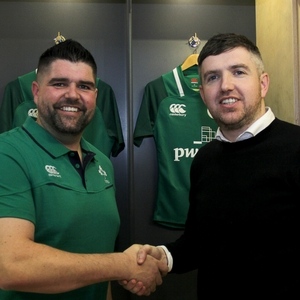 Nick Winkleman of the IRFU and Sean O’Connor of Statsports

Everyone is, by now, familiar with the small gadget that is fitted to the underside of the jersey between the shoulder blades of the player. The tracking unit is about the size of 2 AA batteries and houses all the technologies such as accelerometry and gyroscope technology. Up to about 2 years ago the data contained in the units were subsequently downloaded in a docking station post match and then the coach and players were briefed on their performance.

Now technology allows a player’s performance to be recorded and reported in real-time during match-play. Such information tells the team coaches and players key performance ‘metrics’ such as the total distance covered by a player in match-play, the number of accelerations and decelerations and the impact during any given contact or tackle. These and many more performance metrics are then used by the team coaches to track and plan the workload during a  match. Should a player show a reduction in these metrics or work rate then the coach may decide to substitute that player. Note also that many players want to be back as quickly as possible on to their feet following tackling or rucking. The GPS unit will tell the coach how quickly the player is getting back to his/her feet so that they can now be more involved and engaged in the action.

First to use GPS

Would you believe that one of the first uses of GPS in team sports was to track the workload of Rugby Union referees? In doing so, in 2001/2002 a group of researchers from Japan reported the overall distance covered by Rugby Union referees using GPS units that resembled the old mobile phones. The authors interestingly noted that soccer referees covered a greater overall distance during match-play compared to Rugby Union referees (4,639 metres v 3,739 metres, respectively). Also back in the early 2000’s we completed several studies using GPS to track the performance of key officials – all with a view to helping them become better at their role. 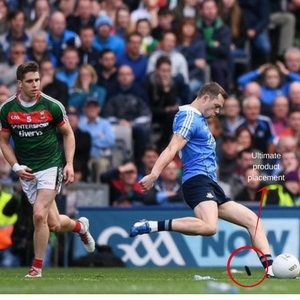 One of the first Rugby Union teams to effectively use GPS technology, for team match performance and training performance, was Ulster in the season 2007/2008. The company that delivered this service was – Statsports – now considered the worlds leading player tracking and analysis provider in elite sports. Co-founder and COO Sean O’Connor and his team have been on an incredible journey these past 10 years and continue to set the standards with their revolutionary Apex and Viper systems.

With a client list that includes some of the biggest, and best, clubs and teams in the world (Man Utd, Man City, Roma, The Chiefs, The Raiders…) it is remarkable that it is only when one of their devices was thrown at Dean Rock in the All Ireland Final of 2017 that they made headlines!

The use of this smart technology has, it may be argued, played a key role in the advance of Irish Rugby and has also supported Irish rugby to be a real international competitive force.

We certainly give GPS technology a big thumbs up in terms of its positive impact in a team sport. In fact its potential to better manage a player’s performance and indeed assist in reducing injury risk has yet to be fully exploited.

Other technologies in Rugby Union 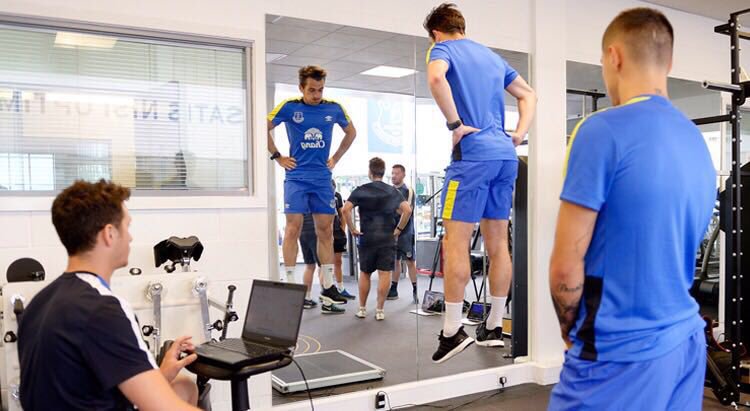 Other technologies that are worth commenting on relate to those used in monitoring a player’s adaptation to training and also in monitoring a player’s return to baseline following match play. Leading professional teams now have an array of technologies built into the daily conditioning routine. For example, some use force plates which are often embedded into the platform within the strength and conditioning facility. The use of recent advances in force plate technology such as the dual plate from ForceDecks allows the coach and scientist to assess how much force each leg is generating as they push off the ground or jump.

If only we could crunch the stats from Keith Earls incredible jump and take last weekend against France in the closing minutes. Joe Schmidt guessed that Earls got three metres off the ground to pluck the ball from the sky. He ended towering over the six feet of Vakatawa who was helpless under Sextons kick.

This data helps the coach or scientist to decide if the normal balance in leg strength and power of the player has changed due to, for example, fatigue following intense training or match-play. It can thus be used as an indicator of fatigue, overall balance between left and right limbs, training adaptation and readiness to return to train or play. Previously, teams used jump mat technology to determine the leg power or jump height of players. This simple technology is now being replaced with more sensitive instruments capable of measuring the rate of force development and other important metrics that track a player’s recovery and strength, power and speed development.