In order to support Holycross National School in their application for the Active Schools Flag, coaches Maggie and Sinead paid 4th class a visit ahead to their annual 5k annual run last week.

The aim of the session was to develop skills and fundamental movements in a fun and inclusive environment. The primary objective of the session is to ensure the activities that are included in the session are generic so that all students can take part and have fun, but also progressive so that the pupils were enhancing their skills throughout the session. 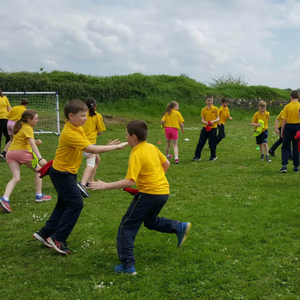 Activity 1: Tail Game Warm Up
Mark out a large square using cones and split the group in half. Giving each side a different coloured bib, ask them to tuck the bib into the back of their trousers or pockets making the bib resemble a tail. The children run around in the marked out area and must then compete against the other team to collect as many other coloured bibs from opponents as possible. There is also the option to eliminate the team aspect and each child would try take as many ‘tails’ as possible. Once your tail is taken you can still try to take other tails.

Objective: This is a great game as it makes the group aware of their surroundings and works on their reactions and change of direction. It’ll also help develop explosive speed and the ability to turn and twist. They are preforming a high intensity warm up yet, at the same time interacting as a group. Estimated Time Given: 10 mins

Activity 2. Jumping and Landing Skills
In this activity set out hurdles, hula hoops and coloured disks in a line. Depending on the size of the group you can split the equipment into two lines. Ask the children jump over the hurdles, in the hula hoops and onto the coloured disks to complete the set. Next, progress the activity by getting the group to jump sideways, double hops, on one leg etc. For the last turn allow the group to do a ‘free style’ jump pattern. 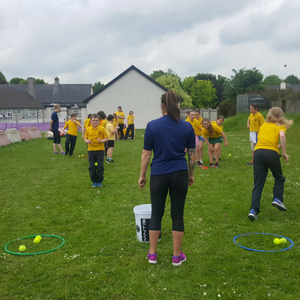 Activity 3. Bunny Hop Game
First of all, use two cones to create two starting points and place two hula hoops approx. 10 yards from the cones. Split the group into two teams with them lining up behind the starting cone. The aim of the game is to place a tennis ball between their knees and bunny hop to the hula hoops where they have to drop the ball. If they drop the ball on their way they must go back to the start. The first group to successfully drop all the balls in the hula hoop wins.

Objective: You are progressing the lesson by integrating their jump skills into a fun and inclusive game. The game promotes team work and encouragement along with developing key skills for the group.
Estimated Time Given: 10mins

Activity 4. Team Game “Grab the Bacon”
Set out a large square area and in the centre place a ball on a cone. Split the group into teams at opposite sides of the square and get them to lie on their stomachs facing the centre cone. Assign each team player a number, i.e 1 – 8. The teacher/coach must call out a number and the players on each team with that number must get up, run and pick up the ball and bring it back to their side of the square without getting caught. If player A has the ball and player B tags them before they get to safety, team B will get the point. 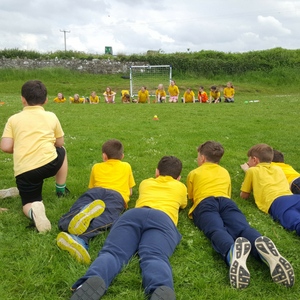 You can add progression to this game by getting the children to lie in the opposite direction with their feet facing the centre cone, or call two numbers and the team members have to do a piggy back or a wheelbarrow to get to the ball.

Objective: The aim of this game is to focus on listening and (fast) running, using both communication skills and developing speed. Each player also has to be reactive to different elements of the activity as they have to get up quickly, run and then have the opportunity to chase depending on the other player.
Estimated Time Given: 15mins

Activity 5: Free Play
Bring the group back to centre and divide them into groups of 4-5, using the equipment give them the task of creating their own obstacle activity. Give them a large space to encourage use of a wide range of different movements such as:
Rolling
Balance
Jumping
Landing
Call the group back to centre and get the groups to try out all the courses around the yard using free style movements.

Objective: This game re-engages the child’s creativity and allows them to take leadership of the task and work in a team environment, both listening and compromising. They calculate their own abilities and tailor the course to suit everyone. They can then trial the other courses and be comfortable in trying out new jumps, hops  etc.
Estimated Time Given: 15 mins
Total time: 1 hour

This lesson plan was developed and executed by Coach, Margaret O’Grady and Personal Trainer, Sinead Costello. 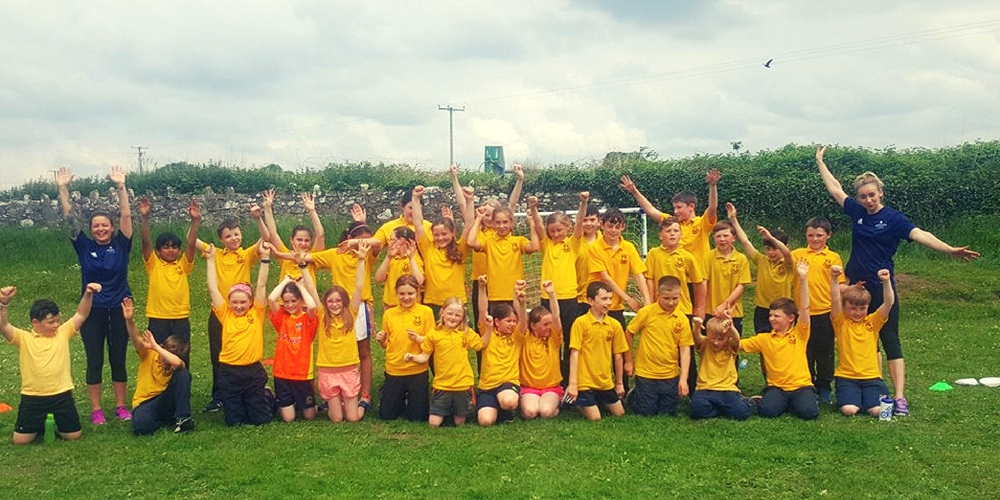 About the Author: webmaster