With Active Schools Week running from Monday 23rd to Friday 27th April, it aims to offer schools around the country the opportunity to come together and work with each other, their community and local amenities to raise awareness about physical education and get involved in fun and inclusive exercises.

In order to support this fantastic initiative we had LIT and Setanta tutor Damien Young design a comprehensive lesson plan to get everyone involved in a range of different activities. With limited sports equipment, Damien planned a number of problem based exercises that children of all ages can interact and engage with.

Equipment used:
• Ladders
• Hurdles
• Spot Markers
However you can adapt and use equipment available to you.

Teachers Rational – the aim of the activity was to give children the opportunity to be creative and to plan their own activity. As a result children were communicating, brain storming, testing the activity to check if it worked. This encouraged them to observe each other’s movement and if someone in the group wasn’t able to perform it they changed it. 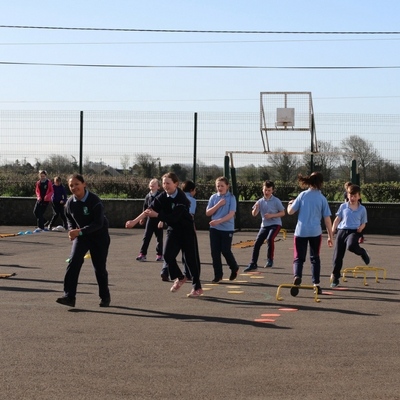 1. Ask the class to spilt into smaller groups of 3 – 4 children.
2. Split the equipment into groups
3. Introduce them to the sports equipment.
4. Ask each group to choose the equipment they would like,
5. Create their own mini activity.

After each group has tried out their course call all the groups back into the centre, congratulate them on their activities.

Obstacle course:
• You will now have 6-9 different activities designed by the children.
• Now encourage them to go and try out each other’s activities, using any movements they want.
• Once they have completed this call them all back in
• once again set them the challenge of completing every obstacle course in 1 minute (or a time suitable to the group).

Benefits: This is a great first game as it immediately engages the child’s creativity and allows them to take leadership on the task and work in a team environment. It motivates them to invest in the activity as they played a part in creating it. As they try out all the courses they are engaging in different movement patterns and getting an effective full body warm up.
Estimated Time Given: 10 mins 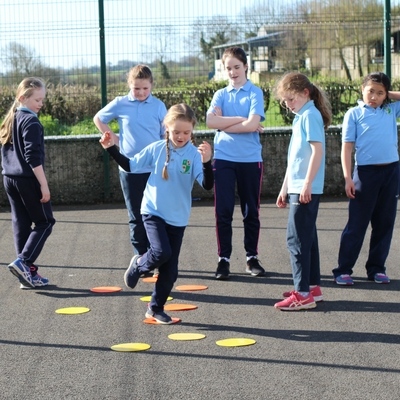 Activity 2: Specific Task – Hop-scotch
Teachers Rational – the aim of the activity was to continue the creative opportunities to plan their own hop-scotch. Like above, children were communicating, brain storming, testing the activity to check if it worked. They were encouraged to make the pattern harder once everyone was able to complete it. Thus, keeping the children engaged.

Using the spot markers split the class once again into groups and give each of them the same amount of flat markers. Ask them to create their own hop-scotch design. Once completed, challenge each group to introduce a new element into their hop-scotch, for example a 180 degree turn or a backwards jump.

Benefits: Coordination of both legs in jumping, balancing on one leg, bending down, and turning. Each group is once again coming together as a team to create a generic patterns that everyone can get involved in. Introducing a new element to the hop-scotch we are trying to expand their movement vocabulary.
Estimated Time Given: 8 mins

Activity 3: Full Group Activity – What Time Is It Mr. Wolf?
Teachers Rational – the aim of the activity was to practice children’s communication, listening skills, patience, reading the situation and choosing a response. Children really enjoy the element of risk involved. They are approaching the wolf and at any stage he/she can turn and chase after them. 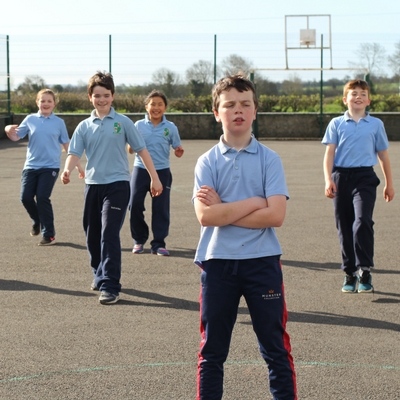 Damien choose the popular game of ‘What Time Is It Mr./Mrs. Wolf?’ for this session. This is where one child (Wolf) stands at one end of the playground with their back to the rest of the children who stand in a line. The children chant, ‘what time is it Mr./Mrs. Wolf?’ to which the Wolf replies with a number, 5 for example. The group then take 5 steps towards the Wolf. They repeat the chant until the Wolf replies with “Dinner Time!”. At this stage the Wolf then turns, runs after the children to catch one them who are trying to run back to the starting line. If the Wolf catches a child they become the Wolf. To increase the difficulty, children could jump forward towards the wolf instead of stepping forward.

Benefits: This is a great group activity for children. Children have to turn and run fast. It involves communication skills as they have to ask questions and listen to play the game and reactive skills as once it is “dinner time” each child has to ‘save’ themselves by moving quickly in a certain direction.
Estimated Time Given: 12 mins

Activity 4: Skills Session – Coordination routines
Teachers Rational – the aim of the activity was to practice children’s coordination by gradually increasing the difficulty. Firstly allowing both limbs work together and then focusing on one limb while the other limb is performance another action. By increasing the coordination of the body limbs, sports skills (i.e. adding a ball) will be easier to develop. 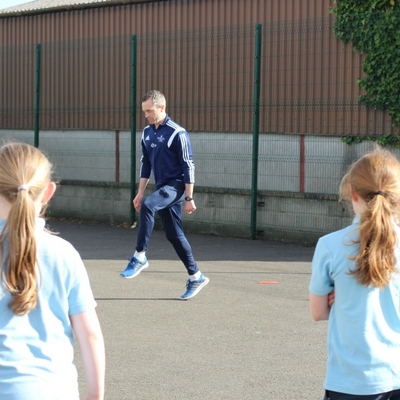 Combinations
The most challenging movement so far, while running forward, bring the right knee up in fronts and then the left ankle to the glute behind. Once children are able joining in the clapping action in front and behind the body

*It’s important to demonstrate each variation for the children and encourage them to try.Depending on age group you may need to remove some of the complexity.

Benefits: These is a great exercise to develop a wide range of motions and teach the group different movement patterns. Once again it’s a fun, inclusive activity that everyone can get involved with. The actions may be challenging but it’s important to note that this is not a competition, just an exercise to encourage movement. Ask those who have learnt the pattern to help those who are struggling
Estimated Time Given: 10 mins 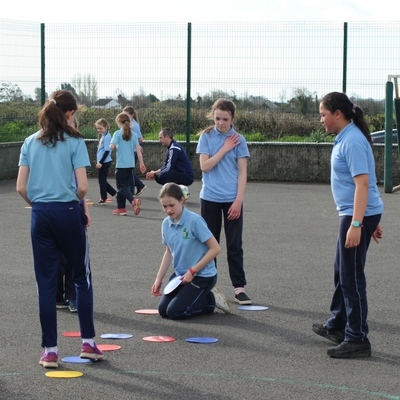 Activity 5: Specific Task Part 2
Teachers Rational – the aim of the activity was give children the opportunity to be creative and to plan their own activity. As a result children were communicating, brain storming, testing the activity to check if it worked. This encouraged them to observe each other’s movement and if someone in the group wasn’t able to perform it they changed it.

Re-introduce the spot markers, ask the children to get back into their groups and re-design their hop scotch. After undertaking a variety of different movements in the before activity, the aim is for each group to use some of the new exercises in the task.

Benefits: This once again enhances the creativity of the child and allows them to visibly progress and grow confidence. It also means that the group is sharing ideas and communicating with each other once again.
Estimated Time Given: 10 mins

Activity 6: Inclusive Exercise
Teachers Rational – the aim of the activity was finish the activity on a high note with the whole group working together as a team. We wanted to ensure children left the session feeling good about themselves. 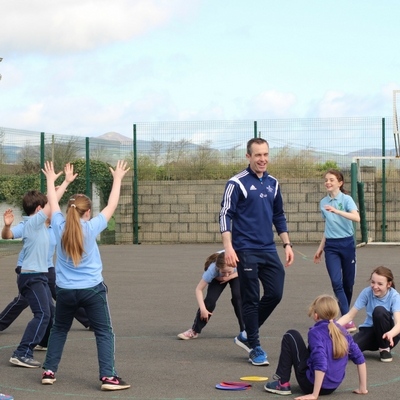 Number each child 1 or 2. Ask all the ‘1s’ to form a circle and the ‘2s’ to form a wider circle around them. Get the 1s to practice 4 side steps clock wise, while the 2s do 4 side steps anti clock wise. Once accomplished get the children (in their circles) to do different exercises. For example jumping jacks, squats or ‘the running’ man would work really well in this exercise. Once again, ask the children to do their 4 side steps but to finish in the position of one of the practiced exercises, for example ‘1 – 2 – 3 – 4 – Squat’. Find fun new positions/stances to finish in. For the end of the session get the children involved in shouting or chanting the name of the school/club/motto to once again reiterate the inclusiveness of the activity. For example 1 – 2 – 3 – 4 – Scoil Mhuire!

Benefits: This is a great game for working on coordination. With different elements to a group activity each child has to focus on their own step, a while being included in the activity. They have to count and react to the finishing position. Getting the children to end the movement by shouting the same thing reiterates the inclusiveness and being part of a team.

A really nice way to end the session is to compliment the group on a fantastic job and get them to give you and each other high fives. This ends on a positive note and the group feels like they’ve achieved something together.

About Active Schools Week
Promoted by The Department of Education and Skills and Healthy Ireland as part of the initiative, they are encouraging ALL schools to organise an Active School Week (ASW) as part of their annual school calendar. It’s a great platform to raise awareness about the physical activity opportunities that are available in their locality and to work collaboratively with students, parents and members of the community in a fun and inclusive way. If this week does not suit, schools are being advised to get active at a time that suits them. You can fine out more details and how to get involved here: http://activeschoolflag.ie/index.php/active-school-week/ 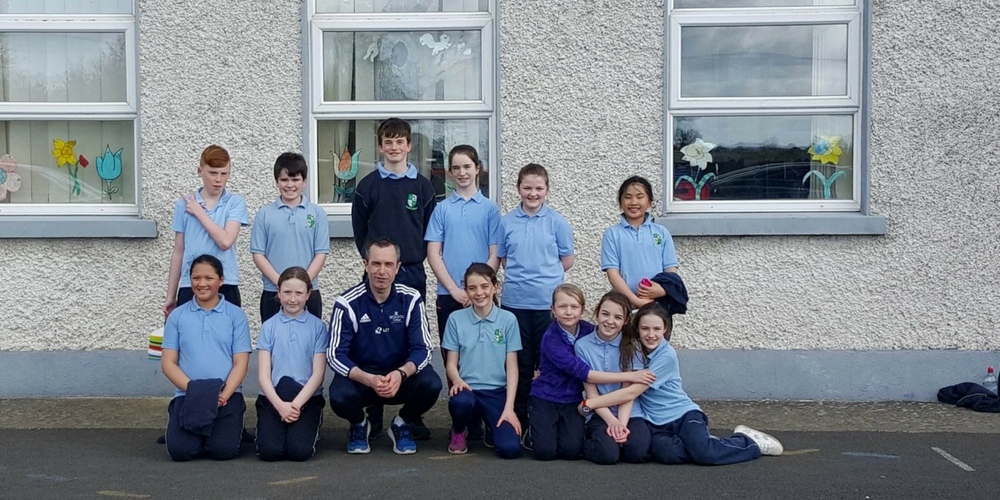 About the Author: Damien Young

Damien is a Senior Tutor with Setanta College specialising in the subject area of Growth, Movement and Development. He has developed activities to improve fundamental and rudimentary movement skills, which are currently being used in a number of Primary Schools around Ireland. Damien is currently the Performance Analyst with the Tipperary Senior Hurlers and has played Senior Hurling for Drom & Inch for the past 20 years. Damien is currently completing a Phd in the area of GPS.