We talk to former Leeds United player, and Setanta College student, Wesley Boyle about his experiences as a coach of youth athletes and players and how he manages to juggle family life, college and coaching.

In 1996 Wesley left his hometown club, Portadown, at the age of 16 to sign for Premiership giants Leeds United. At Elland Road he was part of a star-studded FA Youth Cup winning team in 1997 which included future household names such as Stephen McPhail, Jonathan Woodgate and Harry Kewell. Wesley scored in both the semi-final and final of the 97’ Youth Cup. By this time, he had already made his senior Leeds debut, replacing Ian Rush as a substitute against Newcastle United in September 1996. A hugely promising career at Leeds was unfortunately blighted by injury and Wesley returned home to Portadown in 2002 where he spent over a decade, winning an Irish Cup and two League Cups.

Q: Was coaching always something that you wanted to get into Wesley?

Yeah, I think so. When I retired from football, I got involved in football coaching with local youth teams and schools and I was doing some Personal Training as well. It was around this time that I decided to pursue a degree in Strength and Conditioning with Setanta College. One of the reasons I wanted to do the course was because of all the injuries I had as a footballer. I was always interested in getting things like speed and strength back after an injury.

Q: Can you tell us a bit about what you’re doing now? 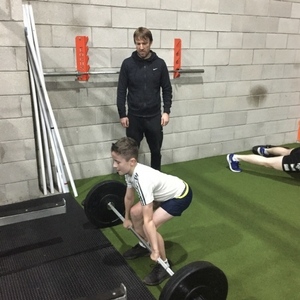 On the job at Wes Boyle Performance

As soon as I began the degree I started Wes Boyle Training and applied what I was learning straight away. I mainly train youth footballers aged between 11 and 18. They all play for local teams. Some receive one-to-one training. I also train some kids who are involved in other sports. It’s great. I love it. I use a local gym in Portadown. I pay them a monthly rent and I just work away out of there. I’m also involved in football coaching with the Mid Ulster Academy, which contains the best players from the Mid Ulster Youth League. We hope to go to Portugal soon to play Benfica and Porto which we’re really looking forward to as it will give the players the opportunity to see the full-time setups over there.

Q: Have you worked with any young athletes who have enjoyed national success or had interest from overseas clubs?

Yeah, I’ve worked with a guy who has won Ulster and All-Ireland 800m – 1500m athletics medals and currently plays football for Portadown Under 16s. He’s been on trials with Burnley, Tranmere Rovers and Blackpool. I’ve also coached some footballers who are involved with Club NI, which is an elite talent development centre for the best young players in Northern Ireland. A few of those lads have been involved with the Swansea City Academy and one player travels over to England regularly during school holidays to play for Manchester United U14s.

In terms of other sports, I’ve worked with a girl who was an All-Ireland hurdles champion. I have been training a 14year old hockey player and it was great to see her selected for the Ulster U-15s, then the Ulster U16s and is currently attending Ireland trials in Dublin.

Q: How important do you think S&C is to the development of youth athletes?

Well from my own personal point of view, I wish I had been exposed to S&C training when I was younger. Put simply, it’s very important. I watch a lot of youth games as a coach at the Mid Ulster Academy, and I notice that lots of the kids’ movement skills are poor. I see a lot of kids falling over, losing balance, lacking basic strength, not being able to sprint properly. I try to improve all these aspects with the kids I work with and I get a lot of feedback from the parents about how well they’re doing. They’re getting a lot stronger and faster and more confident on the pitch.

Q: Do you think that football as a sport has traditionally been reluctant to embrace S&C and are we now seeing that starting to change?

Yeah, I think it’s changing but you still find some coaches who are a bit reluctant. They think S&C is all bodybuilding. You have to try and convince them. Once they see the improvement in the kids who are doing it they think “oh I must get my lads to do that”. My background helps. Having played professionally people maybe tend to trust your opinion. I notice in the gym I work at that groups of GAA players and even individual players, come in a lot and are really into it. That’s something that I don’t see as much with footballers.

Q: Having played professionally in England, what advice would you have for a youngster from Ireland hoping to get a move to the UK?

One thing that’s very important is to make sure your fitness levels are as high as possible. Make sure your body is resilient enough and strong enough. They definitely need to be mentally ready before they go over. A lot of kids go over and they’re just not mentally ready. It’s a big shock to the system. They suffer from homesickness and things like that. They’ve got to be ready for that so it’s not too much of a shock when they go over. I think mental strength is the biggest thing. Attitude as well obviously – work hard. They should aim to be the hardest worker at all their training sessions. Do the right things off the pitch and get their nutrition right. That’s massive.

Q: Is nutrition something that you emphasise with the young athletes that you train?

With all my clients I stress the importance of food. I always ask kids before a session if they have eaten because you can usually tell. Especially with new clients, you’ll see they don’t have as much energy as the regulars and I’ll ask them if they’ve eaten and they might say “oh I had something at lunchtime at school”. I explain to them that they need to eat after school before coming to their session and to make sure to always eat afterwards. They need to get that recovery meal in straight away. I email the parents some nutritional information as they usually ask about what foods their child should be eating to assist their training.

Q: How do find balancing your work, study and home life?

Well we have a baby and I mind him during the day so coaching hours start late afternoon until late in the evenings. I try and get some coursework done in the afternoon when my son is sleeping. Usually though, I find Sunday is the best time to get the study done. It can be tough but it’s definitely manageable.

Q: In what ways has studying the BSc in Strength and Conditioning helped you in your current work?

Wesley Boyle with one of his many successful youth athletes.

Well, it’s certainly been beneficial to my work as a coach with youth athletes. One of the main things I’ve learned is how to actually train properly. Putting technique first is so important. Coaching kids, it’s vital to be able to assess their movement, to pinpoint what their limitations are, their mobility etc, so it’s been great to learn how to do this effectively. Also, learning a lot about the build-up of the foundations of strength and how to plan out sessions have been really helpful to me in my job. As I’m working in coaching, it’s great to be able to apply what I’m learning straight away.

There’s a lot of misinformation out there so it’s fantastic to have confidence in what you’re doing and know that it’s correct. You see the results – you get feedback from the parents and you see it yourself by watching the players on the pitch, where it’s evident that the training is benefiting them.

Q: What advice would you give to someone thinking about doing an online S&C course with Setanta College?

I would say if you’re interested in the area of S&C, definitely go for it. Just set aside a few hours, maybe at the weekend or one day a week, and it’s certainly manageable. Try and be organised and plan out when you are going to study.

Q: What do you find is the most enjoyable aspect of working with youth athletes?

It’s really enjoyable to see the kids loving the sessions. Parents often tell me that their kids can’t wait to come every week. What’s particularly satisfying is to see the improvement in them as the weeks and months go on. You really see them develop, getting stronger and more confident. You’ll see that carrying on to the pitch – they’re more assertive and confident using their physical attributes.

Q: Finally, what do you see yourself doing in the future Wesley?

Well maybe in the future I will get working with a sporting institute or professional team! At the moment, I just want to focus on my studies and continue working to develop young players and athletes as I really enjoy it.

About the Author: Noel Delahunty

Noel Delahunty works as an Administration Officer and Course Adviser on the Setanta team. He is also involved in the proofreading and editing of lecture materials for the Undergrad, Personal Trainer and Masters programmes of study. Noel has a keen interest in all sports but is especially passionate about soccer and the development of the game in Ireland in particular. Noel's favourite sporting memory is knocking over a table of drinks while celebrating Robbie Keane's injury time equaliser against Germany at World Cup 2002!