David Moriarty: An Insight into the Changes of the Last Decade in Limerick GAA

David Moriarty: An Insight into the Changes of the Last Decade in Limerick GAA

How has the preparation of the fitness of hurlers changed in the past eleven years since Limerick last made an appearance at an All-Ireland final? Setanta tutor, David Moriarty was lucky to have been involved in the Limerick senior hurling squad that last contested an All-Ireland final in 2007, where they came up against a ferocious Kilkenny side. Having recently been the fitness coach to the Tipperary senior footballers, David provides an insight into changes in GAA over the last decade, including the introduction of sports technology, player welfare and conditioning programmes.

One of the most obvious improvements in this aspect of squad preparation is the use of sporting technologies, most inter-county teams will now utilize G.P.S. systems to gauge the workload of each player throughout training and games. This is used not only to prevent overtraining and reduce the risk of injury but also to assess players physical capabilities. You add that to the advent of monitoring apps and tools where it allows coaches and managers to assess the weekly or monthly training load of each player. With the aim of reducing the risk of injuries we can clearly see the role that technology plays in physical preparation.

We have also seen the development of performance analysis that is available to players. For example, players can receive video cams of their recent performance or footage of who they are marking the following week to their phones and can study this at a time of their convenience. All these new technological advances have greatly aided players in improving their performance.

I do not claim to be a hurling specialist, but I firmly believe that the standard of hurling has improved. The level of skill execution of players nowadays has developed to a new high, some of the scores that were registered over the past two weeks have been just phenomenal. Back in the day you had your known scorers on each team but now, every one of the players on the pitch has the ability to score from long distances.

Whilst I am somewhat uncomfortable using the term, Strength and Conditioning coach, this is now the title used for someone who has responsibility for the improvement of the physical fitness components. Back in 2007, I was known as the trainer of the team and between Gary Kirby (the coach) and I, we took the majority of the training content within sessions. This has also dramatically changed as most “selectors” now have more of a coaching role, therefore during a particular training session you may have inputs from several backroom personnel. I firmly believe that gone are the days where a selector is solely there to watch training and games and pick a team, most of the backroom team members will have a hands-on approach to training content. 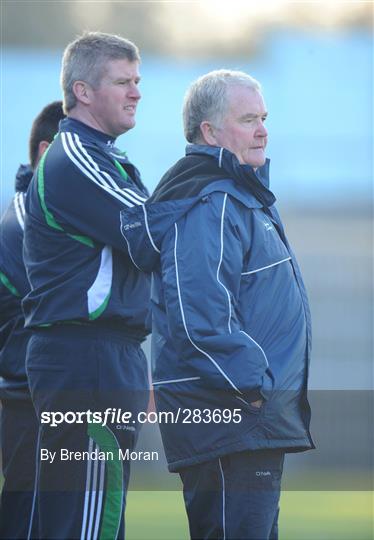 The number of personnel involved in the backroom team has also dramatically increased. This is due to the ever-increasing roles and responsibilities that a manager must now take charge of, be it goalkeeping coaches, performance analysts, GPS personnel, nutritionists and sport psychologists. All of these people require a certain amount of time with the players which lead to the increasing demands of inter-county hurling or football. A good example of this is the increasing amount of time spent now on the psychological aspect of performance. Most teams will have a sports psychologist available to the players, I believe Limerick have Caroline Currid working with them, Caroline is a top-class sports psychologist whom I have had the pleasure of meeting on several occasions. She has worked successfully with the Dublin footballers and Tipperary hurlers previously and the reports for her inputs are glowing. Prior to the 2007 All Ireland final, I arranged Paul O’Connell, who I had played rugby with many years previous, to come into the players for a chat, that was the extent of our psychological preparation.

From a fitness preparation side of things, in the intervening eleven years, most players have bought into the importance of strength and gym-based training. In my early years, players would have been prescribed and adhered to the strength programmes during pre-season and into the early phases of the league. However, they may not have been as strict on compliance in the later stages of the season. Nowadays players strictly adhere to these programmes throughout the season, be they overload or maintenance programmes in nature.

Another improvement that we have seen over the most recent years is the fact that players now perform prehabilitation preventative programmes prior to training and games, this has the aim of reducing the risk of injury to our players. These areindividualised, which would be prescribed by the physiotherapist in conjunction with the Strength and Conditioning coach. There is now a greater understanding of the injuries that many players receive and how best to prevent them. The dual roles of a fitness coach and physiotherapist are more proactive, rather than reactive which it was up to a few years ago. 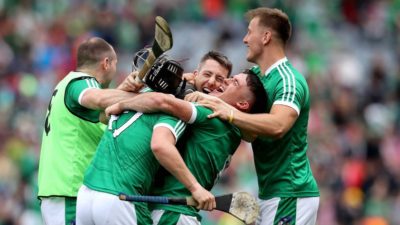 Limerick celebrating after winning the 2018 semi final against Cork.

Whilst all these changes have taken place in a short time, I believe that the on-field conditioning of our players has not altered that much. The methods may have changed slightly with the introduction of small sided and conditioning games, but the basic principles remain the same. Dr. Liam Hennessy often quotes “Methods are many principles are few, methods often change but principles rarely do”. This statement is very true, there are so many methods to achieve the desired outcome but the principles of overload, specificity, interference, rest and recovery, and variation are an integral part of training, just as they were back in 2007. I recall many of the training sessions that we completed in the lead up to the final in 2007 were of a very high intensity attempting to replicate the demands of the game ahead, unfortunately, we came up short.

I believe Limerick have a great opportunity to bridge the 45 year gap since they last won the All Ireland. Many people refer to the physical condition of the Galway players over the last two years, however, I have no doubt Limerick will match them in this area. This squad have proven that they possess the desired qualities both physically and mentally that is required in winning on the 19th of August. Luimneach Abu!!

About the Author: David Moriarty

Dave has been involved in the physical preparation of field-based squads for the past 20 years and has extensive experience in Strength and Conditioning. He has worked with a variety of hurling and Gaelic football teams in Limerick, Tipperary, Clare, and Cork, winning two county titles in Limerick and Cork. Dave also has vast experience working with intercounty teams, being the head Strength and Conditioning and Skills coach with the Limerick Footballers for 4 years, Limerick Hurlers for 3 years and Tipperary Footballers for 3 years. He has also assisted both the Tipperary and Wexford Senior Hurling teams in the past. Dave has served as a Conditioning Coach to his own rugby club, Young Munster R.F.C. in Limerick. He currently is Laois Senior Hurlers lead S&C coach. He holds a Masters Degree in Strength and Conditioning from Limerick Institute of Technology, a Bachelor of Arts in both Strength and Conditioning and Sport Recreation and Leisure Management, from Waterford Institute of Technology as well as numerous other exercise and fitness qualifications.