Most Common GAA Injuries & Why They Occur

Most Common GAA Injuries & Why They Occur

In the second part of Liam Hennessy’s interview with Damian Lawlor of RTÉ Radio the discussion centered around the most common injuries in the GAA and an alarming rise in hamstring strain.

Question: What are the most common injuries in the GAA and why are they occurring?

All studies agree that muscle is the most frequently injured tissue (42.6%) and fractures accounted for 4.4% of all injuries. Lower extremity injuries predominated (76.0%) with hamstring injuries being the single most common injury overall, representing almost one quarter (24%) of all injuries and over half of muscle injuries. Anterior cruciate ligament (ACL) injuries accounted for 13% of knee injuries. The majority of injuries were defined as new injuries (74.7%), with recurrent injuries constituting 23% of all injuries. The majority (59%) of match play injuries occurred in the second half of the match. Eighty six percent of injuries caused over one week’s absence from play. This is very similar to the profile we reported over a 2 year period way back in the early 1990’s for hurling. Also Blake and company reported that hamstring injuries in hurling were the most common soft tissue injury. 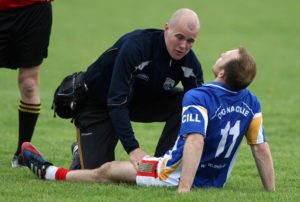 Alarming rise in hamstring strain globally!
Nevertheless, the question has to be asked – is injury risk reduction getting any better for hamstring strain? It does not seem to be so. Roe and colleagues (2016) compared the hamstring injury incidence from 2008 to 2011 with 2012 to 2015 seasons and their results showed that there was a 2-fold increase in hamstring injury incidences across this period. By the way this trend is similar for all team sports from GAA to soccer, to Rugby. For example, Ekstrand and colleagues (2016) reported that hamstring injuries have increased by 4% annually in men’s professional soccer, since 2001. Thanks to the GAA national injury survey we will be able to find out if such a trend is similar in Gaelic games over time and time will only tell. But for the moment, the bottom line is that not only is the hamstring strain, common, it is getting more prevalent. On average, it seems that an inter-county team will incur approximately 9 hamstring strains in a season with an average of 26 days out of team involvement due to this injury (Roe et al 2016).

The reasons why the ubiquitous hamstring injury occurs are numerous. One factor associated with hamstring strain alone does not explain the complex issue of why this injury occurs. We have a good understanding of the mechanism of injury or how it occurs. It mainly occurs during sprinting within most all field team sports and this is particularly true of GAA games. This occurs when the lower leg in moving to the ground. It is being decelerated by what we call an eccentric contraction of the hamstrings, and this it seems, overloads the muscle fibers and they strain or tear. However, regarding the factors responsible and associated with this type of injury are categorised as internal and external.

One of the biggest factors is a previous injury and this has regularly been shown to be the prime predictor of a hamstring strain. Also, younger players (18-20 years old and older players (over 30 years of age) seem to be most prone to the hamstring strain injury with midfielders and backs more prone than forwards, according to Roe and colleagues (2016). Internal factors include issues within the body such as muscle imbalance, a lack of strength in the hamstring and a lack of flexibility about the hip and thigh but interestingly not a lack of flexibility in the hamstrings. Also, a lack of general fitness is also associated with this injury. Couple these factors with overdoing a particular form of training, training or competing when the muscle force tolerance threshold is reached – as when it is fatigued and then you have a nice cocktail for an increased injury risk. 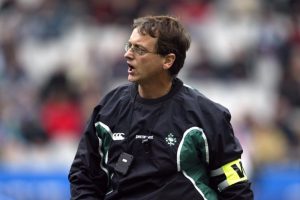 Interestingly, there are many injury predisposition modifiable factors that are simply not being well managed not just with GAA but across teams sports even at professional level. These include muscle imbalance correction and strengthening as well as flexibility training. We had a glut of hamstring strains in the early years of my work within Rugby Union. After careful analysis of the factors associated with this injury, and taking into account each player’s workload tolerance, we were able to very effectively reduce the incidence to an all-time low. But that involved prehabilitation with the help of our physios as well as our strength and conditioning coaches who had to manage training and overall workloads very carefully as well as provide key conditioning methods and exercises.
One such exercise which has to be implemented very carefully is that of the popular eccentric hamstring strengthening exercise. This has become a popular, so called, injury prehab exercise. However, if not properly introduced and supervised, this exercise could exacerbate or increase hamstring injury rate. A key point is that any injury prevention and training plan needs to be well managed by qualified and well trained individuals such as strength and conditioning coaches with the collaboration and close working with medical staff, primarily sport injury trained physios and therapists. During the summer we are planning a very practical workshop for trainers, coaches, physios and strength and conditioning coaches on how to better manage hamstring injury risk reduction.

Stay tuned to the Setanta College blog to hear Dr. Liam’s view and the effects of the challenges facing players, teams and coaches of our Inter-county teams.