The S&C Recipe for a Women’s Rugby Player

The S&C Recipe for a Women’s Rugby Player

First and foremost, let’s get this out of the way: you are an athlete first. How big you are, how great your muscles look at the beach, or how well you fit into your post-match outfit doesn’t matter on the field. This is the cornerstone of athletic-based training, championed by Joe Kenn.

Seems pretty obvious, but you’d be surprised how many other ways there are to train that are not conducive to becoming a better athlete. In short, there are five principles you need to follow, with a few specific types of movement, and you’ll be well on your way to stiff-arming your way to the try line.

A guy much smarter than me, Joe Kenn, built something called the Tier system in Athletic-Based movement. If you want to read the gritty details, go here. However, to spend less time reading and more time training, here’s the basic rundown. There are five core tenets, featured below: 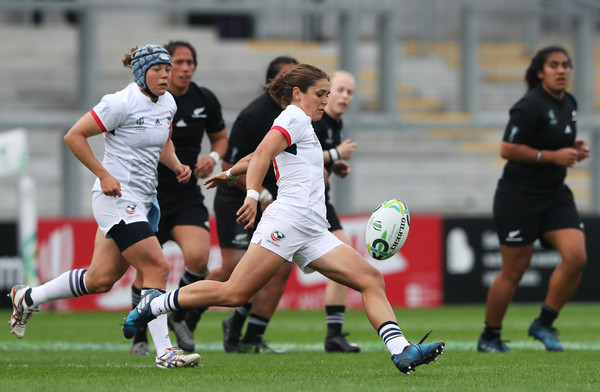 Sport involves controlling your body, and in the case of rugby, other people, in open space. Therefore, free-weight, closed-chain, and ground-based exercises are crucial to developing a rugby player. Why? They all involve functional movement that translates directly to the demands of sport. They also allow us to train multiple planes of movement at once, rather than isolate them (Kenn, 2002). Within these exercises, there are movement categories that cover total, upper and lower body, but it’s important to know that rugby requires you to keep your entire body engaged. Show me a game that requires someone to do a simple bicep curl on the field without using any other muscles, and then we can talk.

Explosive movement is prioritized because speed and power kills. You want to dominate? You have to dominate the weights. We’ll get more into this later and how training philosophies might differ across continents. But basically, you want to train the way you’ll play.
But what exercises do I do?

Honestly? As long as you follow the basic principles and work around your own anatomy/injuries, you’ll be grand. According to strength coach Dan John, the five main movement categories emphasized for athletic movement are (John, 2013):

Loaded carries are listed first because a) I guarantee you’re not doing them and b) they can revolutionize your athleticism. A strong and stable core through dynamic movement is the foundation of power, strength, and speed. The last four you can really choose anything from as long as you get some variety.

As you’ll note above, explosive movements are key. While you can definitely move a bench press with intention, throws, cleans, and plyometrics are sort of in their own category. Every rugby player should be able to jump, crawl, run, and throw. If you can’t, take a massive step back and focus on moving those first. Remember – controlling your body in space is the most important key to athleticism.

To develop power, however, you need a combination of force and velocity. Depending on where you are in your season, adding in these “spices” can keep variety in movements and challenge your body in new ways.

Start light, from the ground, and with just bodyweight. Focus on driving force into the ground to propel you upwards through triple extension. Just a simple bodyweight squat jump can train speed off of the floor. Progress from there to double leg broad jumps, repeated jumps, drop jumps, and single leg jumps/bounds. Really the varieties are endless. However, remember to follow the principles: bilateral and stable before unilateral and unstable.

Especially with female rugby players, upper body power often gets neglected. We’re good at lower body stuff. However, when it comes to adding medicine ball throws, bench pulls or barbell throws, they get neglected. Work on your weaknesses! There’s no reason you shouldn’t be strong enough to throw a rugby ball 20 meters. Sure, your technique might not be there for accuracy yet, but if you don’t train the power behind a pass, you’re missing out on a secret weapon. Tackling, rucking, and all forms of contact require powerful movements and manipulating external objects with prowess. Don’t neglect this part of training.

Last but not least is my favourite category of movement. Clean variations contain all aspects of athletic-based training in one exercise, and that’s why they are by far the most difficult to execute well. They’re total body explosive movements that require a transfer of force at a tempo that perfectly mimics a tackle. Yet when performed incorrectly, cleans can be a nightmare. That’s why I encourage you to add them with care.

If you’re unfamiliar with how to perform a clean, please get a well-educated and attentive coach. These will do nothing for you if not done correctly. Start easy – even kettlebell or dumbbell cleans will suffice. Progress to barbell hang clean shrugs, hang clean high pulls, and finally to hang cleans and power cleans.

Mixing it all in – Force, Velocity, and Percentage of 1RM

Depending on where you’re at in your training cycle, you need to pay attention to a little thing called the force-velocity curve. It’s a continuum on which lie strength and speed of a lift – an inverse relationship of how much weight you can lift vs how quickly you can lift it.

For simplicity’s sake, the F-V curve can be broken into five zones:

Now I wouldn’t want to paint anyone with a broad brush, but I have seen something unique about training for performance, now having lived in both Europe and the United States. The biggest difference programming is that coaches and athletes stateside are obsessed with brute strength and size. Europeans, on the other hand, seem much more concerned with proper movement. I blame the different types of football.

Everyone in America is obsessed with “looking the part”. Therefore, most of the training is based on %1RM. While there are definitely benefits to this when done properly, there’s something missing: daily adaptations based on stress, soreness, and reactive speed.

Enter something championed called velocity-based training. Although this has been around for a while (and picking up traction now in the states), it’s been my experience that coaches from Ireland and the UK incorporate this more often.

VBT follows the same force-velocity curve as %1RM training, but it tends to highlight specific areas across the curve that an athlete has a specific weakness in. For example, testing the profiles of athletes at the start allows tailored training specific to their needs at that time, rather than a simple percentage based off of a textbook. According to Tom Turner, a S&C coach from Leinster writing for Strength of Science, “a steeper load-velocity profile means that increases in load are having a larger effect on velocity. A shallower profile means that increases in load are having less of an effect on velocity” (Turner, 2017).

In short, a player who might perform a trap bar deadlift with low speed at sub-max loads has their training directed towards the speed-strength end of the curve to create maximal adaptation. On the other hand, a player who might be more explosive on the other end of the curve might need more max strength training. As specificity is the key to training adaptations, this is vital information for a coach and athlete.

These zones correspond more or less to the previous zones with %1RM training. However, without measuring velocity (via an external method such as Tendo or Push), it’s impossible to get an objective measure of whether the weight is being moved appropriately during a given training session. Anyone who has ever trained consistently under the iron can attest that some days the weights feel heavier than others. By limiting ourselves to a constant percentage of a fixed number, we can’t account for day-to-day changes in recovery, hormones, sleep patterns, and more.

Our body and nervous system are constantly evolving. Therefore, by understanding the velocity that corresponds to whichever trait we’re trying to develop, a proper load can be selected each training session (Turner, 2017). It’s an absolute game-changer for rugby players especially, given that in-season demands such an intense load on the body.

So, what does this mean for you?

Follow the basic principles and create your own masterpiece. Use all forms of movement, and make sure to include some unilateral and explosive exercises for a complete program. Below is a rough sketch of what a good, well-rounded day might look like. Note – this is just an example and only one day, so it definitely does not include everything you’d need long-term, holistic program design.

Finally, if you don’t have access to something that measures velocity, don’t fret. Traditional strength training methods are still applicable, just think of them more as tempo-training. Slow things down on the eccentric when trying to build size, and fire with the maximum intent on the concentric phase to build power and speed. However, if you do happen to train or work in a gym where you can use VBT – take full advantage of it.

Good luck with your training, and I’ll see you on the pitch.

About the Author: Kimber Rozier

Kimber Rozier is an American rugby union player, making her debut for the Eagles in 2012. She won a bronze medal at the Rugby 7s Women’s World Cup in Moscow and competed in the 2014 World Cup in Paris. Kimber is an NSCA certified strength and conditioning specialist, holding a Bachelors degree in Exercise and Sport Science.