Last week over three hundred college American football players underwent what has been described as “an intensive four-day job interview” in pursuit of an opportunity to play in one of the world’s most prestigious sporting organisations the NFL (National Football League). Lucas Oil Stadium in Indianapolis, Indiana played host this year’s NFL scouting combine where all 32 NFL team’s representatives from general managers, head coaches, performance staff and medical staff members evaluated the elite talent of the nations top college football players in preparation for the upcoming NFL Draft. 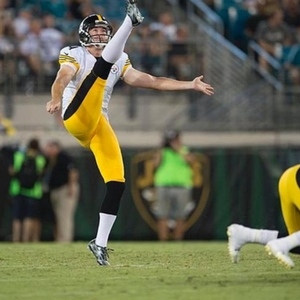 The Draft
Held in the spring of every year the NFL draft is a chance for each franchise to boost their roster by adding the most dominant collegiate players, outside of the trade market and free agent signings. The draft consists of seven rounds and the average round consists of 32 picks, which allows each team approximately one pick per round. Some teams have more than one pick in a round, and some teams may not have any picks in a round. Picks per team vary because draft picks can be traded to other teams. A team’s draft position is in reverse correlation with the success it achieved on the field during the previous year, which is why the team with the worst record has the first pick of each round, and the Super Bowl champion has the last pick.

Eligibility for the draft
In the past there have been several outliers who have found themselves in the NFL without going through the scouting combine and draft process. A notable example in the league today is Chris Hogan who played lacrosse in Penn State for four years and a single season of football with the Hawks at Monmouth University. The dynamic wide receiver entered the NFL as an undrafted free agent in 2011 and had brief stays at franchises such as the San Francisco 49ers, Miami Dolphins and Buffalo Bills. However, the former lacrosse player found a home in Foxborough with the famed New England Patriots dynasty and captured his first championship ring in Super Bowl LI in 2017. Additionally, Pittsburgh Steelers punter Jordan Berry has continued the trend of Australians with a AFL (Australian Rules Football) background to punt in the NFL. After attending and punting for Eastern Kentucky University, Berry went undrafted but was invited to Steelers training camp where he out punted fellow aussie Brad Wing to secure the starting job and a lucrative NFL contract. The NFL’s eligibility rules cover many different types of new players hoping to enter the league and set a criterion for new players before they can secure a player contract or practice player contract. 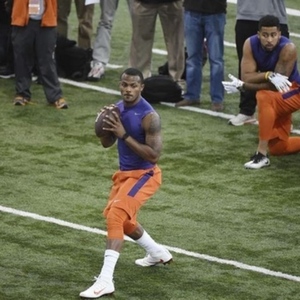 Quarter-back Deshaun Watson drafted by the Houston Texans in 2017 during his pro day at Clemson University. Photo Credit: Gannett-cdn.com

However, due to the popularity and prevalence of collegiate football most NFL players are developed in a college program for four to five years under NCAA rules and enter the draft after impressing for their respective college teams and then through the national scouting combine process. In 2013 Bleacher Report.com reported that of the 1,947 NFL players, 1,374 (70.6 %) were an NFL draft pick. College graduates or underclassmen who declare for the draft under specific eligibility rules can showcase their talents during pro days hosted by the colleges. The pro day provides a platform for a college football program graduates to display both physical attributes and football skills through test similar to the official national scouting combine. The invites to the national scouting combine will mainly comprise of college players from the power conferences the SEC, ACC, Pacific 12, Big Ten and Big 12 while several other draft eligible players who don’t receive an invite to the national scouting combine from other less well-known colleges can showcase their talents for the draft through the five regional scouting combines. All 32 NFL franchises will have several scouts who will visit colleges across America throughout the collegiate season and follow players progress right up to the combine to inform the general managers and head coaches in making draft selections.

The Combine
The NFL combine is a series of quantitative and qualitative tests designed to access both physical and the technical skills ability of the elite college football players to see if they have what it takes to secure on NFL draft pick and ultimately a rookie contract. Medical and injury evaluation, anthropometric (standing height, weight, arm span, hand size etc.) measurements, cognitive tests, drug screenings and interviews with coaches and scouts are all conducted during the scouting combine. However, the stand out tests that are commonly associated with the combine are the:

Along with these tests that evaluate the physical capabilities of the players in a quantitative manner i.e. the time of your 40, the amount of reps on the bench, the height jumped in the vertical, several drills specific to defensive and offensive positions within football are a qualitative form of analysis on how well an athlete can execute the skills required in their given position. This gives scouts and coaches an idea of an athlete’s efficiency of movement, ability to change direction and ball handling skills in a football context. Both types of analysis of a player are vital combined with other test mentioned above to gain a holistic approach in the evaluation process and ultimately deciding if the football player warrants a draft pick and a spot on an NFL roster. 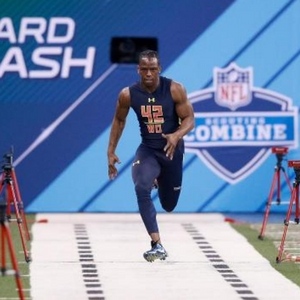 John Ross ran the 40-yard dash in 4.22 seconds at the 2017 combine setting a combine record in the process. Ross was drafted by the Cincinnati Bengals in 1st Round. Photo credit: Joe Robbins via NJ.com

The 40-yard dash
The 40-yard (36.576 metres) dash is the marquee event at the combine. The players are timed at 10, 20 and 40-yard intervals/splits using an automated timing technology such as the fusion sport SmartSpeed timing systems. The players start in a three-point stance and execute a maximal effort sprint to evaluate their ability to accelerate to near maximum speed from a static position. Each player has two maximal effort attempts and the fastest time is taken on record.

The Bench Press
The bench press is a test of upper body strength. With the weight set at 225 pounds (102.058 kg) the athlete must attempt as many repetitions as possible at that set weight. Unlike a 1 rep max test which is a test of maximal effort of the upper body strength, with the set weight there is also an element of strength endurance required. Full extension at the top of the lift and no bouncing the bar off the chest are criteria for a rep to be officially counted.

The Vertical Jump
The vertical jump otherwise known as the Seargent test, jump and reach test or the Abalakov test, is an unloaded power test to measure expression of lower body power in a vertical direction. The jump is measured using an apparatus called the vertec. After measuring the athletes reach height the vertec is set 10 inches above the reach height of the athlete. The athlete is then instructed from a standing position to jump and reach and move as many pegs on the vertec apparatus as possible. Jump height is then calculated as the difference between standing reach height and jump height. The vertical jump record is held by Kansas City wide receiver Chris Conley, who in the 2015 combine measured at 45 inches in the vertical jump. 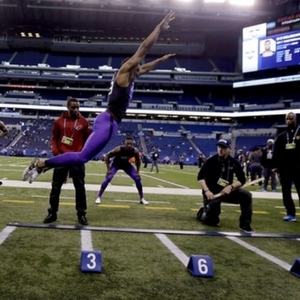 University of Connecticut cornerback Byron Jones broke the combine record in the broad jump in 2015 with a jump of 12-feet, 3-inches. Photo credit: Julio Cortez/AP/Corbis

The Broad Jump
Also known as the standing long jump the board jump is another unloaded power test to measure explosive lower body power in a horizontal direction. The athlete stands behind a line marked on the ground with their feet a comfortable distance apart ready to jump. A two-foot take-off and landing is used, with swinging of the arms and bending of the knees to provide forward drive. The athlete is instructed to jump forward as far as possible and land using both feet without falling backwards.

The 3-cone drill
The 3-cone drill tests an athlete’s ability to change directions at a high speed. The cones are laid out in an L shape. The athlete is instructed to sprint five yards to one cone, sprint back to the starting cone, and head back to the second cone where they run around it and cut right to the third cone. The players then run a circle around the third cone from the inside to the outside and run around the second cone before returning to the first cone. This access the athlete’s ability to accelerate, decelerate and change direction in a small area.

The 20-yard shuttle
Also know as the short shuttle or the 5-10-5 test, the 20-yard shuttle tests the athlete’s lateral quickness, deceleration and ability to change direction effectively and efficiently. The athlete starts in the three-point stance, explodes out 5 yards to his right, touches the line, goes back 10 yards to his left, left hand touches the line, piots, and he turns 5 more yards and finishes.

The combine on-field workout schedule started Friday the 2nd of March and ran through to Monday March 5th. Friday saw running backs, offensive linemen, and special team’s participants take to the field with quarterbacks, wide receivers and tight ends compete on Saturday. Sunday saw defensive linemen and line-backers on the field and it finished on Monday with defensive backs. You can catch up on all the weekends activities on: http://www.nfl.com/network and find out more about the NFL’s next draft event this coming April.