Following an exciting concluding weekend in the Six Nations, we talked to Setanta College tutor Antoine Mobian who is head of strength and conditioning for Germany Rugby – a team aspiring for inclusion into the major international tournament. Antoine holds a number of academic and professional qualifications including the UKSCA and a Masters in Strength and Conditioning.

Antoine worked with Colomiers Rugby in France and for Connacht Rugby and the IRFU for several years. He was the Strength & Conditioning coach to many professional rugby players and Irish Internationals. He worked with numerous representative teams including the Ireland U18’s.

Antoine is a World Rugby educator and he is leading the Strength and conditioning education programme for World Rugby across Europe, Africa, Asia and North and South America. Antoine is currently the Head of Strength and Conditioning for the German Rugby Union and has been a tutor with Setanta College for the past 6 years.

1) How long have you been involved with the German Rugby team as S&C coach?

This is my third season with Germany Rugby. I started as an S&C consultant for the National Rugby XVs and overtime my role extended to work with U20, U18, 7s and coaches’ education. I am now the Head S&C for the German Rugby Union.

2) Having worked with Connacht prior to taking up this role, what was the biggest challenge you faced when taking up the Germany role?

There are always great challenges whatever level you are working at, whether you work with one of the best professional Clubs in Europe like Connacht rugby or an up and coming rugby National team like Germany. I think the biggest one is fighting perceptions. At the time we fought very hard with Connacht to show that we were developing high performance winning players like Ultan Dillane, Kieran Marmion, Jack Carty, Tiernan O’Halloran, Robbie Henshaw and many more. The Challenges with Germany Rugby is not that different, we are showing that with hard work, belief and resilience which are the values of the team, the players can improve their performance individually which leads to collective progress. This progress can then result in successful outcomes like a win against a better ranked team such as Romania (ranked 8 places below) 3 weeks ago.

3) What steps did you implement to advance Germany from a low base level to now fighting for a spot in the 2019 RWC?

The first thing I did when I started working with the National Team was to do a needs analysis of the structure and the team to see what were the strengths and weaknesses of the players and the environment. I then designed a four-stage physical and structural development plan to implement over the next 4 years. The first year we implemented basic elements of strength and conditioning, simple monitoring systems, practical nutrition recommendations and effective recovery protocols. Now we are implementing a more power/speed based approach with the addition of Olympic lifts and plyometrics elements. We are also using more technology in terms of testing and monitoring of the team. We are gradually adding and improving elements of preparation of the team on and off the field. The key is to implement the plan with consideration of what is going to be effective for the team and how practical it is going to be for the players. My philosophy is the use of simple and effective methods and I am a firm believer that doing the basics very well is key.

4) Did you find your squad initially had a very young training age and if so what steps did you take to combat this? 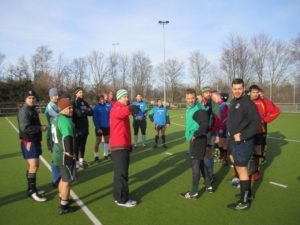 In the squad we have players with a professional background, others come from the club scene and some players are young and are just starting their physical development. They all have individual needs to develop. What I found when I did the needs analysis for the players’ strength and weakness is that they had common traits. Our players usually having good upper body strength but the level of lower body strength is below the expected standards. Also for most positions the players are slightly underweight compared to our counterparts and for others, like back rows, they are very underweight. The last aspect is a below standard conditioning level especially for the forwards. From this S&C assessment/profile I designed a plan to develop lower body strength, lean body mass and aerobic conditioning. Over the first year we worked excessively on building up strength for the lower body with exercises like squats, deadlifts and lunges. We also focused on full body hypertrophy with special attention on nutrition and increasing food intake through the day. To develop the aerobic conditioning, I used different methods but the focus was slightly more towards off feet conditioning- using Heart rate monitors to evaluate the effort of the sessions. Another important step I focused on was to start a comprehensive prehab program focusing on hamstring strengthening, shoulder stability and lower body mobility.

5) With teams such as Germany and Georgia pushing for inclusion into major tournaments such as the 6 nations, has this changed the coaches current and long term training focus?

The vision for the German National Rugby team is not to play in the 6 nations but to play more tier 2 high intensity games. At the moment, we are playing 8 international fixtures per year with the ENC and the international November friendly games. These games are the highest level that the team is exposed to and we need the number of games to increase for the players to get used to high performance rugby. With club rugby, an international German plays 1200 minutes of rugby per year which is a lot less than our tier 2 counterparts or from the professional leagues. It is extremely important that we get exposed to high intensity games consistently in order to progress physically, tactically and emotionally if we want to ever feature in a major tournament like the Rugby World Cup.

The focus now is to develop a strong underage structure and to develop young German eligible players so as well as continuing to develop and fine-tune the national players we are working on developing a structure in order to produce winning players for Germany. We are slowly but surely starting to service young German players in terms of nutrition and recovery education, strength and conditioning development and with monitoring system. We are actively working with 5 centres in Germany (Berlin, Hannover, Cologne, Heidelberg, Frankfurt) and look to expand to Hamburg and Munich.

6) Having been involved in lecturing in the S&C field with Setanta College for several years now, do you think this has helped further your skills and practical understanding as a coach yourself?

The knowledge delivered by the Setanta College courses is very practical and highly applicable for amateur to high performance teams. What I tutor for weightlifting or the injury prevention module is very close to what I use on a day to day basis with my players. The coaching points and cues used during the weightlifting workshops are almost identical to the ones used during the gym sessions especially for the Olympic weightlifting exercises such as the clean and the different derivatives. As a tutor, I always make sure that the cues used during the workshop are simple and applicable in the real world so when the students go back working with their athlete they are comfortable with the new knowledge and able to deliver it very well.

7) Finally, for young aspiring S&C coaches, what advice would you give when coaching a team part-time.

My advice when coaching teams or athletes is to do the basics extremely well and to do it with consistency. Have a weekly training routine with simple weights plans, effective conditioning program, comprehensive mobility and prehab program and good nutrition. Repeat that routine every week with consistency. Then when you see progress, start evolving the program with more volume. When your players have a good base increase the intensity. Don’t forget that very few things in life improve consistently, things evolve by plateau. Your players might progress really quickly at the start then plateau and that is very normal, consistency is then key. With consistent hard work the players will gradually improve their level of strength, fitness and sustain less injuries.

About the Author: webmaster