Resistance Training for the Youth Athlete

Resistance Training for the Youth Athlete

Resistance training for the youth athlete has been a controversial topic in recent years. When to start and how much is enough or too much are debated questions and will likely remain so in the future. With the increasing popularity in strength and conditioning amongst youth and amateur sports, it is a natural response for parents to be concerned. Some of the myths surrounding youth resistance training include;
1. Stunting an adolescent’s growth
2. Leaving an adolescent at a higher risk of injury due to their ongoing development

These myths, amongst others, are unfounded and in fact, a carefully designed and supervised resistance training program can facilitate a youth’s natural development and minimise the risk of sport related injuries. For example, resistance training combined with plyometric training has been shown to decrease the risk of sport-related ACL injuries in adolescent girls (Dahab and McCambridge, 2009). Resistance training is well-recognised as both safe and effective for the youth and research has shown positive improvements in muscular strength, muscular endurance, power production, change-of-direction speed and agility, balance and stability, coordination and speed of movement in youth athletes. Reports of injuries related to strength training in youth athletes, including epiphyseal plate fractures and lower back injuries, are primarily attributed to the misuse of equipment, inappropriate weight, improper technique, or lack of qualified adult supervision (Dahab and McCambridge, 2009).
In some cases, there may be coaches and parents who overlook the importance of development with their young athletes, e.g. focusing solely on muscle hypertrophy in rugby. While muscle hypertrophy is an important component of sports such as rugby, development of the young athlete should be the primary focus and should not be overlooked. This approach can be compared to building a house without the necessary foundations.

Long Term Athlete Development
Improving performance in youth athletes should be viewed as a long term plan. The Long Term Athlete Development (LTAD) pathway should be considered and implemented when designing a program for young athletes. This model provides the coach with a pathway for developing the child, the adolescent, and the adult player through a series of stages.

While the LTAD model presented here is associated with a chronological age, it should be noted that biological age needs to be taken into consideration, as the chronological age is not very accurate in determining the stage of physical development of a young player. Thus, designing a resistance training program should be based on an appropriate progression according to the athletes’ stage of maturation (biological age) in addition to training age, motor skill competency, technical proficiency and existing strength levels (Chavez, 2018).

Peak Height Velocity
Young athletes must be carefully monitored during their growth spurt and training should be prescribed accordingly. Peak Height Velocity (PHV) is the term given to describe the period of time in which an adolescent’s rate of growth is at its fastest. Typically, the onset of the adolescent growth spurt coincides with the onset of puberty and occurs two years earlier in girls, at approximately 11 years of age, than in boys, whose growth spurt does not begin until approximately 13 years of age, although this will vary considerably between individuals (Walker, 2016). Before, during, and after PHV it is suggested that there are certain periods in time in which young athletes are more sensitive to particular types of training and their capacity for adaptation is at its greatest. A speed ‘window’ is proposed during the growth spurt for both boys and girls and a strength ‘window’ is identified just after the growth spurt for girls and some 18 months later for boys (Balyi and Hamilton, 2004). Therefore, regularly monitoring an athletes rate of growth will assist the coach is tailoring the training programme in synchronisation with the athlete’s biological age as opposed to their chronological age. 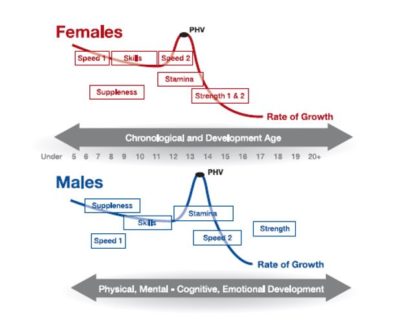 What William recommends
When a young athlete is learning a new exercise, typically he or she will use submaximal loads and exercise progressions, which places the focus on form and technique. For example, the squat can be progressed from a counterbalance squat to a goblet squat, before advancing to a barbell squat. Generally, single maximal lifts are not recommended until skeletal maturity is attained. It is recommended that the young athlete resistance train 2-3 days per week, on non-consecutive days. Body weight is considered both safe and effective for younger athletes (6-9 years of age) and this can be progressed for adolescents to 6-15 repetition max or approximately 50-80% of 1 repetition max (1RM) (15-18 years of age). Progression should only take place once good technique has been achieved and a good foundation has been built. The table below outlines general load and repetition guidelines by the Australian Strength & Conditioning Association (ASCA) (Duhig, 2013).

Conclusion
It has been suggested that a child can begin resistance training once they have developed the appropriate physical, cognitive, and social maturity (Duhig, 2013). It is important to build a good base of fundamental movements during childhood before progressing to resistance training, as this will help the youth develop more efficient motor skills whilst simultaneously reducing their risk of injury due to improved body control and technique. The importance of fundament movement skills in childhood has been described in a past blog and can be accessed here: https://www.setantacollege.com/youth-exercise-guidelines/. The benefits of strength training for the youth athlete appear to outweigh the potential risks not only in sport but also to combat the rise in obesity in children and adolescents. The role of the S&C coach in a sporting context is to develop robust young athletes and facilitate their transition from youth players to senior adult players.

About the Author: William Hughes