Methodology
The population examined included a large group of amateur male South African Rugby players and the injury definitions and data collection procedures used were aligned with the recommended methodologies set by the RICG (Rugby Injury Consensus Group) which was established by the International Rugby Board, in order to standardise the reporting of injuries in Rugby Union. All reporting of injuries also followed the guidelines of the RICG with the exception of detailing injury rates per 1000 player hours, which was impossible to determine, given that player hours could not be monitored. Participants were questioned on their position of play and details of any injuries they experienced over their previous season of play so as to obtain current data. As a secondary aim of the study, participants were questioned on participation in any form of movement screen/test, so as to determine if this is being used as a tool for injury screening within the amateur Rugby community. 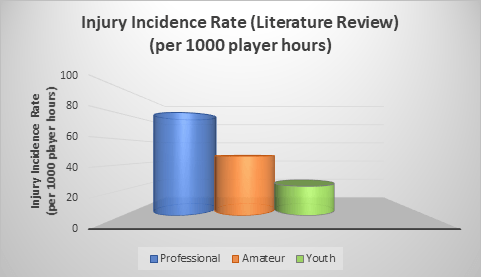 Analysis of the examined amateur population, and comparison to a substantial review of previous research literature, revealed that injury incidence increases with competitive level, age, and exposure to play. However, the severity of injuries is greater at lower levels of play. There is a significantly greater incidence of match injuries compared to training injuries, as well as a greater incidence of new injuries compared to recurrent injuries; with a trivial difference in the incidence of injuries between backs and forwards and no particular trends of significance in injury rates per position. 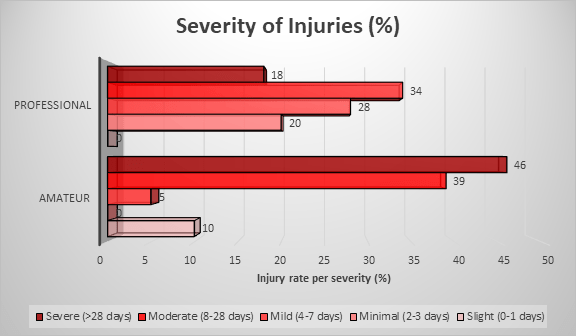 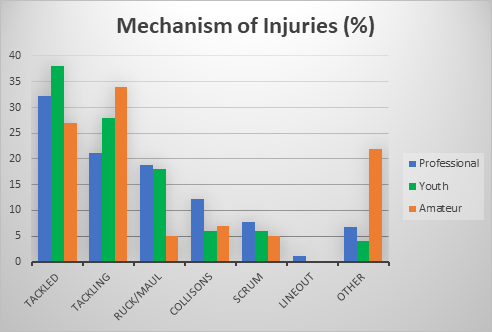 Comparison of the mechanisms of injury shows that the tackle for both the tackler and the ball carrier is the event which results in the largest amount of injuries across all ages and levels of play. The current literature reveals that at both professional and youth level, being tackled results in the most amount of injuries, with tackling being the second most common cause of injury, whereas at an amateur level the tackler presents with more injuries than the tackled player. The final observation of the examined population showed that only 4.9% participated in a movement screen as part of their Rugby preparation.

Summary
This study reveals that although the risk of injury is greater with increasing competitive level, age and exposure to play, the severity of injury experienced at amateur and youth level is greater, which may be explained by a lower level of formal preparation or the lack of access to medical treatment, when compared to what is available at professional level. Aside from the severity of injuries, the examination of all data showed similar trends across all levels. However, with tackling being the most common mechanism of injury at amateur level, this may further support the argument that a more advanced level of preparation, through physical conditioning and technical practice, may decrease the exposure to more serious injuries. Additionally, data from the examined amateur population suggests that movement screening is underutilised as a tool for reducing the risk of injury at amateur level Rugby. Consequently, it could be suggested that a greater focus on preparation, including an emphasis on technique in the contact zone as well as the use of movement screening, could not only reduce the risk of injury but also potentially decrease the severity of injuries experienced in the amateur spectrum of Rugby.

With this in mind, Annie is currently exploring the development of a Rugby specific movement screening protocol based on the skill demands and injury incidence profile of Rugby.

About the Author: Annie McCarra

Annie McCarra is a Strength & Conditioning Coach and former student of Setanta’s Master of Science in Performance Coaching. From Tipperary, Ireland, but currently living in Johannesburg, South Africa since 2014, Annie works with a number of elite athletes, primarily within Rugby, from which she has developed a keen interest in injury reduction strategies and is currently exploring the functional pathway of Rugby to better prepare the youth player for the game.