Setanta College lecturer Dr. Joe Warne examines the rise of ‘super shoes’, the latest advancements in running shoe technology, and the impact on the world of athletics.

For a few years now, the sport of Athletics has been suffering. Not so much the short suffering of an athlete on the last lap of a gruelling 800m, but the long, drawn-out suffering of a Sport that was losing its “je ne sais quoi”. Whilst we can trace the magnificent, physical, varied feats of the Ancient Olympic Games as far back as 776 BC, the reality is that the modern sport of Athletics is not holding the attention of the World outside of the 4 year Olympic Games. Athletics just doesn’t hold the fan base of exciting and dynamic team sports or the prestige of individual sports events such as Wimbledon.

This is not something that World Athletics are oblivious to. The World Championships in Qatar 2019, for example, had to start letting in locals to generate a crowd because of the vacant seats. The sport has been experiencing lacklustre TV viewership and a tarnished reputation because of performance doping, and fan numbers have been dwindling steadily over recent times. Notwithstanding the huge boost that London 2012 bought to the sport, not even novel new events, such as “last man standing” over 1500m with a knockout each lap, and city street games, have been able to increase interest.

The rise of the ‘super shoe’

With all this in mind, one cannot help but wonder if the recent “super shoe” revolution of this sport is not so much an inevitable progress of sporting technology, but a last desperate act of genius by the powers that be to inject some success into this sport. And it’s working. 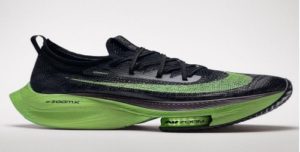 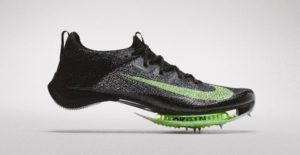 At almost every point in sporting history when a device or technique had the potential to upset the balance of fairness, a regulation was implemented. In 2009, the use of high-tech suits in swimming were immediately banned when it was clear that records were falling steadily. When EPO starting becoming a notable problem in the late 1990’s in cycling, out of competition testing became the norm as well as a required mandate for all elite athletes. Every pole vault, shot putt and javelin athlete understands that regulation of the equipment that they throw is a necessary part of the integrity of the sport. So when a novel running shoe design is widely introduced in 2016, advertising carbon fibre plates and a new Pebax foam that substantially improves running performances on the road, history would suggest that regulation is quickly adapted. But World Athletics remains silent.

Roll on more than two years, a successful attempt at an artificial sub-2 hour marathon, multiple world records at several distances including the complete destruction of Radcliffe’s “untouchable” marathon record, and a flurry of protesters and supporters alike who light up the media world with coverage of the controversial topic, and still World Athletics say nothing. Where is the strong arm of equality, fairness and sporting ethics that we had hoped for? Who will champion the values of athleticism that makes this one of the longest-standing sports in history? Is the silence a complete lack of leadership and respect of the virtues of the sport, or is there in fact an ulterior motive?

When World Athletics finally acted on the ‘super shoes’, four years had passed. Four years of intrigue, speculation, frustration, and mostly, four years of media attention to the sport. They had watched from the shadows, taken notes, and in the buzz of “the new”, they had seen a lifeline to inject some spark into the scene, and they would be crazy not to take it. In January 2020, World Athletics ruled that the controversial running shoes that clearly increased performances to the same margins as many performance-enhancing drugs, the same shoes that allowed individual responders to have a substantial advantage over others in the same shoe, would be allowed to stay in the sport. There was not so much as a single attempt to reduce the technological arms race that was now in full swing. Where the previous regulation had stated that no shoe can provide an “unfair” advantage, new regulation stated shoes could now contain up to 40mm of technology, can be adapted to suit the individual, but must have a version of that shoe available in the consumer market to be considered legal. In other words, please continue, but sell a few while you do so. Oh, and make some spikes for us, too.

Back on the Map

Personally, like many in the sport, my first reaction was disappointment. The core values of what attracted me to this sport – physical hardship, the contest of wills, the fantasy of the unknown in every race – were being destroyed. I wanted to watch a contest and not wonder if drugs, or now footwear, were responsible for the result, as opposed to hard work and dedication. But slowly, my reaction has changed. The sport has experienced that lifeline it needed; athletics was the benched sub, the half-forgotten player, only to be called to the pitch with 60 seconds remaining and hitting the shot of a lifetime. That shot has come in many different ways, the millions who watched Nike’s “Breaking2” attempts, the constant news of local, national, international, and world records falling, the personal boosts to runner’s performances that spark so many conversations over a pint (or Zoom call), and the substantial increase in athlete qualifications for major championships that generate such positive news in a world that needs it. I have lost count of the number of conversations I have had with people outside of this sport about shoes or performance, with people who would have had no previous interest in the sport. If the classic “all news is good news” applies to the promotion of this sport, then World Athletics are winning, because they are the talk of the town. Athletics is back on the map, because super shoes make super news.

Dr. Joe Warne is Programme Director for Setanta College’s MSc in Performance Coaching, you can find out more about the programme here.