Over 4 years ago, completely disillusioned with the fitness industry and how personal trainers were managed, including myself, I made the decision that I wanted to work in team sport. Therefore, I would have to return to studying.

This brought up a lot of questions. Where? How? How long? How much? I searched online for courses that would be suitable for my situation, as I would have to continue working at the same time. I had gotten to know an Ulster rugby player at the time and discovered that he was doing a Masters in Performance Coaching with Setanta College. I had met him through the gym that I was working in at the time and ironically, this was the same gym that had been the icing on the cake in terms of completely draining the passion I had for the fitness industry. As he had an impressive career in professional rugby, I knew he would have been exposed to the highest quality of S&C coaches. I gave him a call to gain some insights into Setanta College, the quality of the courses and whether it would be the right move to make. He had nothing but good things to say about the content of the courses and the people involved in the organization, so I took the leap.

Having not been much of an academic in school, I was still hesitant as to whether this would be the right fit for me. By the end of the first module, Functional Movement Screening, I felt I had learned more in just 12 weeks than I had in any other fitness or personal training course. I was continuing to work as an independent trainer, and immediately began applying my new knowledge. When I achieved fairly decent marks in that first module, I had a new found determination to succeed. After just 12 weeks, I was sold. Nothing was going to stop me, I was going to take the S&C world by storm.

For me, studying on a part time/flexible basis with Setanta College was a perfect fit. The lecturers are all fantastic practitioners in their field, and excellent educators too. I was never one to speak up or contribute in class in school or university the first time around, a big factor in why I failed. I’m sure the staff got sick of my emails and questions this time around! (There wasn’t that many…)

On a serious note, however, I always received thorough and detailed replies, and it was clear that they recognized how much I wanted to succeed and overcome past failures. I was supported with continued encouragement and couldn’t ask for a better group of mentors, from office staff right through to Liam Hennessy himself. The network that the college supplies and supports you with is absolutely world-class. 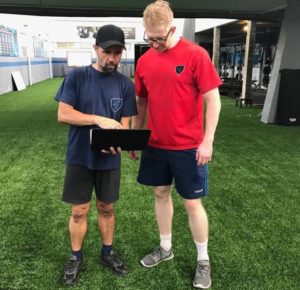 Dean and Craig White preparing for a training session.

In 2018, I responded to a Facebook post that an opportunity had come up with Bath Rugby Club in England. I thought that this was it, my chance to shine or at least get my name out there. I heard that I had been shortlisted with two other candidates. I lost out to someone with a Master’s degree and more experience than I had. I wasn’t disheartened – I was still studying for my Bachelor’s degree and thought my time would come.

I didn’t think that time would be just two weeks later. I received a phone call from the college about an opportunity with Craig White, who had contacted them about a year-long internship, mentored by himself and working with Uruguay Rugby Union in preparation for the RWC 2019. My first reaction was “Craig who?” (I know he’ll have some choice words for me if he reads that!). Joking aside, how could I say no to an opportunity that would give me a chance to learn from one of the best in the world and work with a Rugby World Cup team. After a brief consultation with my fiancé and her mum, both who told me to go for it, I phoned back and said I’m in.

In January 2019, I was headed for Montevideo, Uruguay. To say that I had one of the most topsy turvy, emotional rollercoasters of a year would be an understatement. I got to work with a remarkable group of men every single day, but on the other hand, my father was diagnosed and eventually lost a battle with cancer. The support that the URU, Craig, the players, the backroom staff and Setanta College showed me was unimaginable and reinforced exactly why it is that I love doing what I’m doing. When you are fortunate enough to get a job in an organization like that, surrounded by people like that, it’s not a job – it’s a family. On my return, I pretty much immediately started working with Landsdowne U20s and Blackrock College in Dublin. I’m enjoying every bit of it, and it’s great having an influence on the development of their young players, thanks to the experience I gained in Uruguay and Setanta College. 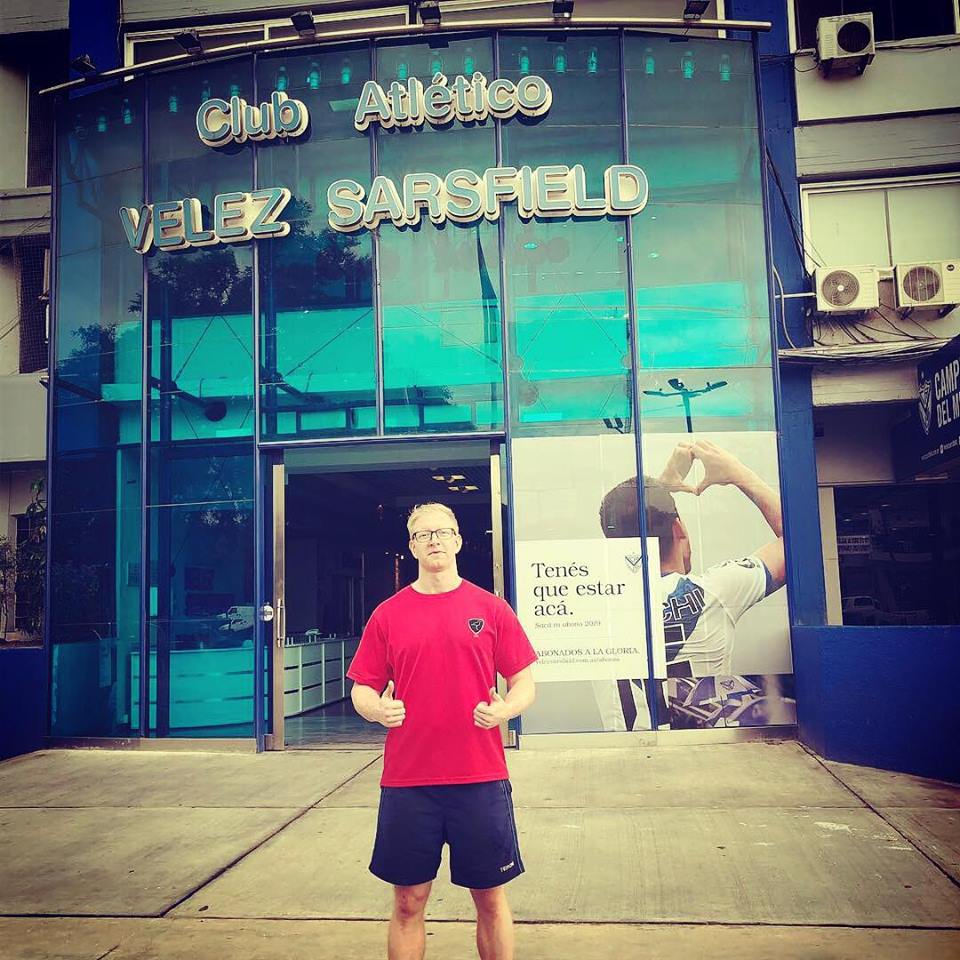 Dean on his first trip away with the senior team outside of Club Atlético Vélez Sarsfield, Buenos Aires.

When I went to Uruguay, I was tasked with setting up the GPS technology and gathering data that, in the latter stages of preparation, we would us to determine the effectiveness of the intensity of the on-pitch drills.

I had no experience whatsoever with this technology, and just dove into the deep end learning what I needed to do. Again, this provided the opportunity to connect with some of the top practitioners in the field. Before leaving for Montevideo, I visited Ulster Rugby and Leinster Rugby to get an idea of where to start.

I began by putting together my vision of a database, looking at Total Metres, HSR, Metres per Minute, Max Speed and accelerations & decelerations. Initially, it was about painting a picture and getting a hold of data from other organisations to compare and figure out exactly what I was looking at.

I was very lucky to work with Ben Pollard for the 10 week build up to Japan. Ben was with England as lead Sports Scientist at RWC 2015, and is now with Stade Francais as Head of S&C. Two things I took away from my experience.

What I see as the very pinnacle of what I have learned is this – while technology is an excellent tool in monitoring and tracking training load and training intensities, it only acts as a guide on how the programme went. Building the relationships with players, the backroom staff and extending to other employees within the organisation, shaped the culture and what we were about far more than the introduction of GPS technology. Knowing why you are there and being very clear on what you want to achieve to set the tone for the level of performance in training and games.

That was very much driven by Craig. We were a family and everyday our intention was to give our best as a player or as part of the performance team. External factors may dictate that sometimes you don’t give your best. The next day when someone isn’t at their best, you are there to pick them up. That’s the definition of being a team.

That’s what drove the most successful Rugby World Cup in Uruguay Rugby history. We may have beat Fiji, but we also competed against Georgia, Australia and Wales. The Welsh game being one that I was extremely lucky to get to.

As my Bachelor of Science degree comes to an end my journey with Setanta College hopefully goes on. I have applied for the Master of Science in Performance Coaching programme. While I may not have taken the world of S&C by storm just yet, I’m trusting Setanta College to continue to provide me with learning, an incredible network and the support that I have got in the past 4 and a half years.

You can learn more about the courses provided by Setanta College here, or download our brochure below.

About the Author: Dean Lester

Dean has worked in the fitness industry for 13 years. Started off in membership sales, he worked his way up to becoming a personal trainer. In 2015, Dean choose to go back to education and joined the Setanta College BCs in S&C and aims to complete the Master of Science in Performance Coaching next year. In 2019, Dean spent 9 months in Montevideo, Uruguay working with the national teams within the URU with emphasis in the latter stages on the Rugby World Cup preparation in which Uruguay recorded their most successful tournament in history. In that time they also won the Nations Cup, South American Championship and the U.20s qualified for the World Trophy in Brazil. He is currently lead S&C Lansdowne ay RFC U.20s, lead S&C at Ballinteer St John GAA, and Assistant S&C at Blackrock College.