A fascinating sub-plot to this Rugby World Cup is the story of the Irish names involved.

Within Federazione Italiana Rugby there is obviously the head coach, Conor O’Shea, while a key member of the Italian backroom team hails from Dundrum, Co. Dublin. We are delighted to sit down with Mark Brady,  strength and conditioning coach and data scientist with the Italian Rugby Team.

Born and raised in south Dublin, Mark grew up in Dundrum playing G.A.A for Ballinteer St. Johns. He attended St. Benildus College before moving to Thurles to pursue a career in strength and conditioning, eventually graduating from our BSc in Strength & Conditioning programme.  In just a short few years he has gone from Thurles to Uruguay, and from Ireland to Italy. This is his story. 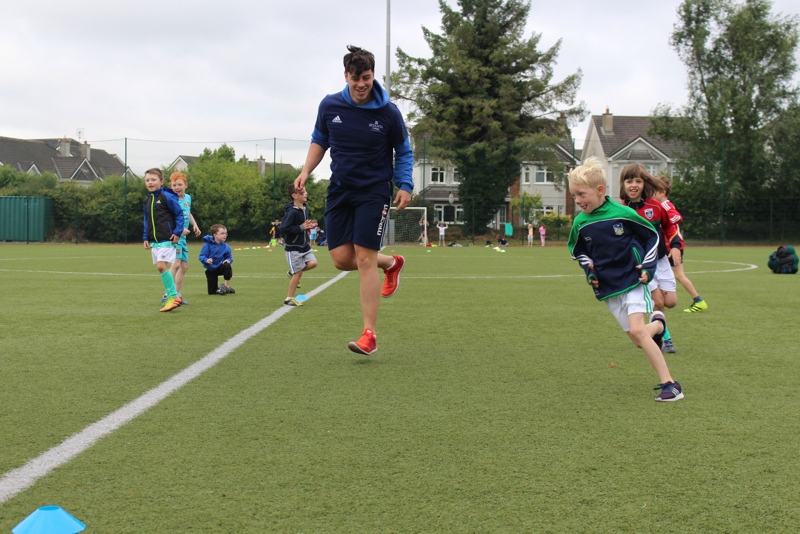 Mark at work during a Setanta College youth development workshop.

Can you give some background to your time studying and coaching to this point?

I completed a BSc in Strength and Conditioning Coaching in Setanta College. During this time I worked with the Irish Paralympic Powerlifting team and Tipperary G.A.A. After which I was fortunate enough to spend a year working with the Uruguay national team. I came home and spent a cup winning season with Blackrock College before being presented with this incredible opportunity to work with Italy Rugby.

So from working with Tipperary G.A.A to Uruguay – an incredible move for a young coach to make. How was your time in Montevideo?

Working in Uruguay was certainly a unique experience. Coaching 150+ athletes on a day by day basis from the senior national rugby team to the women’s handball team you learn to appreciate what athletes need at different stages of their development process. Uruguay rugby is a developing nation and therefore have their challenges in terms of resources and personnel. The manner in which Uruguayan rugby players stepped up to another level for 80 minutes 10/15 times per year will stick with me for the rest of my coaching career. “WANT” is a word I regularly hear from Mike Catt and other coaches. How much does a player really want it? I’ve seen in an amateur environment in Uruguay with no resources the true meaning of WANT. I have seen what players can give in a positive training environment and it really doesn’t matter how sophisticated a training programme is if a player’s attitude in the gym is to tick a box.

The next stop on your journey was securing your current job with Italian Rugby. How exactly did that come about?

Conor O’ Shea (Head Coach) and Pete Atkinson (Head of Athletic Performance) had been in contact with Liam Hennessy and Seán Hogan in Setanta College about creating a role for one of their students. After applying for the position I was lucky enough to get invited to Cardiff to interview with Conor and Pete, and here I am!

What was it like settling in and working with a 6Nations squad? Not to mention working with the likes of Conor O’Shea, Stephen Aboud, and a legend of the game like Sergio Parisse? 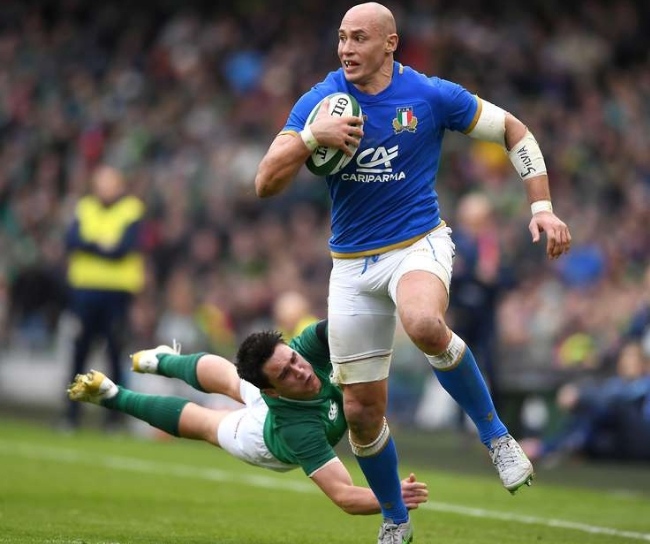 Sergio Parisse on the charge

Looking back at the Six Nations, being in the team bus whilst getting escorted into Murrayfield by a pipe marching band would give anyone butterflies. Looking out at the excited faces makes you remember what you’re working for. These past few weeks have been some of the most exciting weeks of my coaching career to date. Every day brings a new challenge and you certainly gain an appreciation of the smaller details. Working with Conor, Marius, Mike, Pete and the other coaching staff I have learned so much about rugby. These guys are some of the greats of the game, while Sergio is arguably one of the greatest players to ever play the game.

I was given the advice to try to be the dumbest person in the room as often as possible in your life, this way you are always learning. With these guys around me every day it is impossible not to learn about what it takes to thrive at the top of professional sport and everything that comes with that.

What are your views on Italian rugby and the structures being put in place?

Italian rugby is at a stage now where Irish rugby was not so long ago. We are trying to close the gap between ourselves and the best rugby nations in the world by learning from the mistakes they made on their own journeys. Conor and Dr. Liam were a big part of that journey in Irish rugby and this is one of the main reasons I am here.

‘Vogliamo vincere’ – words uttered by Conor O’Shea in relation to his ambitions for Italian Rugby. What is the meaning and what is the vision?

‘Vogliamo vincere’ translates to “we want to win”. As a group of players and coaches we are certainly not putting the hours in to be the also-ran. There is ambition in this group and we won’t apologize for that.

The Irish connection is strong on the playing front also. It was amazing to see Irish born outhalf Ian Mckinley come off the bench in the opening game in the Six Nations earlier in the year. While another outhalf, Ian Keatley, is soon to ply his trade in Italy also. Interesting times!

Ian McKinley and myself actually come from the same parish in Dublin. We have an excellent relationship on and off the field. Working with intelligent/intuitive athletes is always enjoyable as they ask questions which leads to a more engaged and effective learning process for both the coach and the player.
Ian Keatley will be a great addition to Benetton rugby next year also. He is the product of an excellent Munster system, a great professional and a versatile rugby player who is already doing well in London Irish ahead of making the move.

Who has influenced your career – who were your mentors?

Prior to arriving in Italy my main mentor was Daniel Moore who I worked under at Blackrock college, a truly great coach who understands what is important in preparing a sports team. Since I’ve arrived in Italy I’ve been blessed to work with and learn from some of the best coaches in world rugby such as Conor O’ Shea, Pete Atkinson, Kieran Crowley, Marius Goosen, Mike Catt and Brett Smith. Seeing how these guys approach their roles and look at rugby has taught me so much about the game. Learning to integrate the physical preparation side with the technical-tactical side of rugby, both on the field and in the gym, opens your programme to even more possibilities. Tying basic gym exercises to position specific actions on the field, and ensuring players are getting the physiological stimulus they need from rugby specific work, will allow for an integrated and effective preparation system for all involved.

Dr. Liam Hennessy often talks about blending the art and science of coaching. In your role as a coach, but also as a data scientist, how you do you mix the practical work with sports science data to better inform your players and fellow coaches? 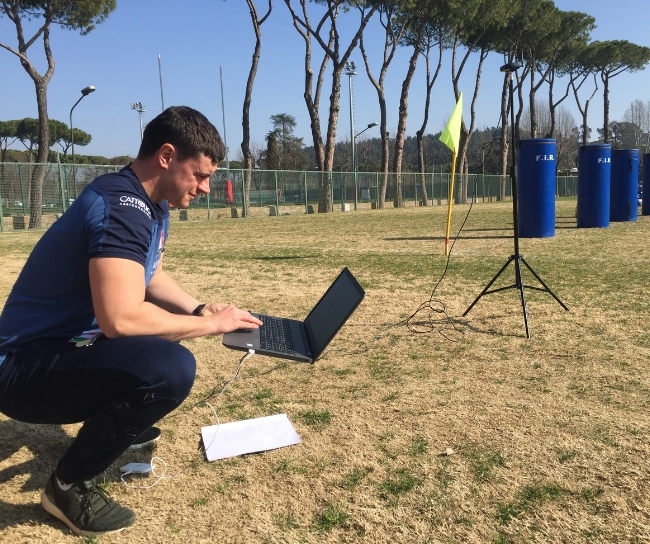 Prior to starting this role my experience had heavily leaned towards the coaching side of physical preparation as opposed to the data science side. This made me apprehensive at the beginning. I got speaking with a good friend of mine, Andrew Morrissey of STATSports, and he implored me to embrace this challenge citing the fact that most physical preparation coaches are strong on either the data side of things or the coaching side of things. Having a strong background in both would serve me well.
One of my key roles was setting up a GPS system which was very labour intensive requiring a lot of work behind the computer. I was responsible for programming for some of the players but aside from that a lot of my time was spent building data storage/analytical systems. Since we’ve begun to lay the foundations of a GPS system I have the chance to spend more time coaching in the gym and on the field. At times it can be challenging to balance both sides with plenty of very late nights finishing reports or programmes. Over the past few months I’ve come to realize that although you are working with a lot of data, you look at it through a coaches lens and you can drive the coaching side of things with the right data. There is an art to it.

As the game evolves, what are the physical attributes that are most common now versus where they were 10 years ago? What makes an international rugby player in your opinion?

While strength and size are obvious necessities to be a top-class international player they will not be enough. The modern game is so fast that to be a top player you must be a powerful animal. Less and less players are surviving on game wit alone. One of the attributes I appreciate more, especially over the Six Nations, is mental resilience. When in camp you are away from friends and family, travelling around the world building yourself up for a huge game every weekend can be mentally challenging. Put on top of that the outside criticism you may or may not be getting you begin to understand that physical ability and talent is not going to get you many caps for your country without strong mental perseverance. Not to mention the other aspects of being a professional, such as nutrition and recovery, we have to pay attention to all these elements.

Looking ahead to RWC2019. What are the goals?

The goal is to arrive at the world cup in the best possible physical condition with all players available. Just like every other team. After that, we will take it one game at a time!

It’s been great to talk to you Mark and see the success you have had. Have you any advice for an aspiring S&C coach who can learn from your journey?

I don’t really consider myself to be at a level to give advice to other coaches. My philosophy so far has been, go outside your comfort zone, get experience from different philosophies. Eddie Jones recently told me that I’m doing the best thing by gaining experience in rugby systems in different parts of the world, rather than just staying in Ireland where everything is already at a very high level. He did add, “Just make sure to leave before you become part of the problem.” in his typical tongue in cheek manner!

Mark Brady isn’t going anywhere soon, there is much to be accomplished! As a student, and now as a coach, he continues to be a leading example of what can be achieved with ambition, hard work and specialist knowledge of the science, craft, and art of strength and conditioning.