Diarmuid Connolly, the epitome of a mixed sport athlete

An athlete’s dietary approach and physical fitness rarely come into question when they are at the peak of their powers. However, when trying to retain their position by holding off an up and coming star, or trying to make the step up from being a club player to inter-country star, players will jump to extremes as they believe it will give them an edge.

Although only an indicator of athletic performance, body composition is not far from the minds of most athletes. GAA players and rugby players (both academy and professional) are just two examples of athletes whose body composition is assessed three to four times a year. This gives feedback to S&C coaches and nutritionists on how the athlete is progressing. These figures also give the manager an insight into where the athlete is in terms of commitment levels and professionalism. For example, do they continually improve year on year, or have they returned from the off-season with a 4-5% increase in their body fat?

The pressures associated with body composition can often lead athletes down a route of experimentation with their nutrition. Sometimes to the decrement of their on-field performances.

Before we examine how a low-carbohydrate diet may affect performance, its first important to understand some definitions, and the demands of field sports.

Definitions vary, but a low-carbohydrate diet typically contains <50 to <150 g/d of carbohydrate, and >50-75% of total energy from fat. 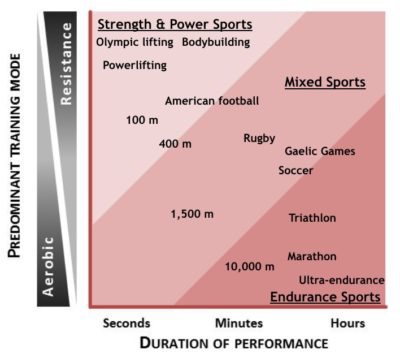 The sports continuum – Athletic performance for some can last <10 seconds in duration, while others can last >24 hours.

Field sports are characterised by intermittent bursts of high-intensity play followed by rest, pauses and periods of low intensity. Field sport athletes rely on the aerobic system (carbohydrate and fat) and the anaerobic systems (phosphagen and anaerobic glycolysis) for energy production, which will be covered later in the article.

While a weightlifter only needs to be strong and explosive, or an ultra-endurance athlete only needs to sustain submaximal intensity for hours on end, a field athlete has much different requirement. A field athlete is required to have good endurance (70-90-minute game), while also being strong and explosive (hitting a ruck, tackling or shouldering an opposition player), and be able to sprint intermittently when required (>10-40 m break). Not to mention ball playing skills, communication, and vision.

Low-carbohydrate diets and field sports. What does the science say?

There is a lack of experimental information within field sport athletes, but there is considerable research examining the impact of low-carbohydrate diets on indicators of performance within other populations, such as endurance and weight category athletes.

Without tracking calories, low-carbohydrate diets are frequently associated with improvements in body composition i.e., maintenance of lean body mass, and reductions in fat mass. This can lead to athletes associating weight loss with the removal of carbohydrates from their diet. In reality, it occurs as they increase the protein content of their diet (which helps with satiety), and they reduce their caloric intake.

This represents a positive on this front for low-carbohydrate diets.

Evidence demonstrates that strength performance is sustained following an adaptation to a low-carbohydrate diet, even when carbohydrates are restricted to <50 g/d.

This should be of no surprise however, as both tests rely almost exclusively on the aforementioned phosphagen system. This energy system rapidly produces adenosine triphosphate (ATP, or energy) from adenosine diphosphate (ADP) and phosphate within the muscle using creatine phosphate stores. This energy system, which becomes exhausted after 8-10 seconds does not appear to be decremented by lowering the carbohydrate content of your diet.

No benefit or decrement to performance is likely to be observed here.

Evidence demonstrates that endurance capacity and endurance performance are sustained following an adaptation to a low-carbohydrate diet. Notably, athletes oxidise a higher percentage of fat vs. carbohydrates at submaximal/aerobic intensities, due to less carbohydrates being consumed/available.

Note: do not confuse fat oxidation, with decreases in adipose tissue. This is dependent on energy balance.

No benefit or decrement to performance is likely to be observed here.

These are short tests, designed to measure an athlete’s explosive power and acceleration. Similar to strength performance, they would be very dependent on the phosphagen system. Evidence suggests that performance of these tests could be improved following an adaptation to a low-carbohydrate diet, had the athlete lost significant fat mass. Due to improvements in their power to weight ratio.

Likely positive results can be observed on this front for low-carbohydrate diets.

These tests are representational of the metabolic demands placed on field sport athletes. Unlike a 10 or 40m dash which both rely heavily on the phosphagen system, or endurance tests that rely on the aerobic system.

These tests rely on a combination of the phosphagen, aerobic and anaerobic systems. As the intensity of exercise progressively increases, the anaerobic demands (energy production in the absence of oxygen) of exercise increase – as the body’s ability to deliver environmental oxygen (air) to the working muscles via the lungs and heart nears capacity. In these circumstances, low-carbohydrate diets are frequently associated with reductions in exercise economy (energy demands are increased) and exercise intensity.

How? Low-carbohydrate diets are associated with a reduction in the active form of pyruvate dehydrogenase; a carbohydrate oxidative enzyme that helps link the glycolytic pathway with the Krebs cycle, via conversion of pyruvate to acetyl-coenzyme A (i.e., anaerobic metabolism). If an athlete’s ability to produce ATP (energy) anaerobically (in the absence of oxygen) is compromised, their on-field performance will likely become compromised. To put it in very simple terms: they will be proficient in gear 1-3 (aerobic – jogging) but will be less efficient in gear 4-5 (anaerobic – repeated sprints).

As an athlete, you must ask yourself – are the improvements in body composition worth it for the potential decreases in metabolic efficiency at near maximal intensities?

Nutrition is much more than something that dictates changes in body weight. Nutrients can greatly impact on the physiology of exercise, and therefore, your athletic potential.

A low-carbohydrate diet may be of benefit to an athlete looking to improve body composition in the off-season. However, this may be a short-sighted approach. If they’re not learning portion control and developing cooking skills using carbohydrates – which will become important in season, if they wish to maximise performance and sustain their desired body composition.

Dr. Fionn McSwiney holds a PhD in Nutrition Science and Exercise Physiology. Fionn is a Sports Nutrition Lecturer for masters students at Setanta College. In addition to his work with Setanta, Fionn is a Nutrition Consultant at LUCID Nutrition Consultancy (www.lucidnutritionconsultancy.com), and a postdoctoral research fellow at Dublin City University.

About the Author: Fionn McSwiney

Dr. Fionn McSwiney holds a PhD in Nutrition Science and Exercise Physiology. Fionn is a Sports Nutrition Lecturer for masters students at Setanta College. In addition to his work with Setanta, Fionn is a Nutrition Consultant at LUCID Nutrition Consultancy (www.lucidnutritionconsultancy.com), and a postdoctoral research fellow at Dublin City University.