Creation and Evolution of the IRFU Player Pathway

Creation and Evolution of the IRFU Player Pathway

Many sports use the guidelines described in one of several Long Term Athlete Development models, otherwise known as LTAD or LTPD pathways. While early models were described in the 1980s, it was not until the late 1990s and into the 2000s that such models were considered by team and individual sport associations. Few have in the meantime evaluated the relative effectiveness of such models in achieving their respective development and performance related goals. 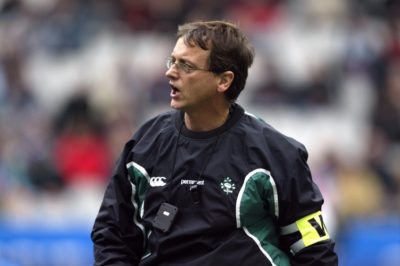 Recently, Dr Liam Hennessy completed a near 30-year evaluation of the effectiveness of a model that was initiated in the early 1990s within Irish Rugby and traces its evolution over 3 decades. Its effectiveness in delivering one key factor, that of player longevity, is a testament to the effectiveness of the model and pathway that evolved over the 3 decades. Indeed, the effectiveness of the structured pathway at both secondary school level and sub-academy level in particular, is considered to be the ‘jewel’ in the development of the player as they progress through the transition period to becoming professional players.
The limitations of this review are that it focuses on the active male population and is restricted to considering the 15-a-side game.

Criteria for Assessing Effectiveness
The effectiveness of the pathway is assessed in a number of ways. Firstly, the placement of Ireland and the provinces within the Six Nations and in the European Cup respectively, over a 30 year period is considered. The second criteria used to assess the effectiveness of the development pathway is to examine if there is an association between ‘Training Age’ and ‘Longevity’ of a player within the professional game. Training age refers to the number of years where a player had direct coaching and oversight of physical development before entering the professional game. Simply put, if a player had a supervised programme in strength, power, speed, mobility, and multi-sprint endurance over at least 40 weeks in the year then he is considered to have completed a year’s training age. This is different to ‘Coaching Age’ where the player has weekly coaching in the skills of the game (both technical and tactical).

The third way of assessing the effectiveness of the pathway of development is to do so in a qualitative way by examining the status of 10 key factors that include:

Here we do not go through all the above criteria, instead, we select just a few to make some key points.

Pathway Creation and Evolution
The pathway of development was originally created by Stephen Aboud, employed as one of a few Development Officers by the IRFU in 1992. His insight and oversight in creating a pathway of development for amateur players during the pre-professional days were fundamental and crucial to the evolution that took place in a well-managed fashion in later more ‘professional’ years. This progressed from a National Academy in the 1990s to a provincial academy structure in 2003 and then onto a provincial sub-academy in 2005/6 (in Leinster). This also involved close collaboration with clubs and schools and indeed third level education institutes and universities during this period. A focus on physical development for youth players started within the National Academy in 1995/6. See Figure 1 for key timelines in this period of development.

Figure 1. Evolution of Development pathway from 1992 to 2016. Key personnel in charge of player development include: Stephen Aboud from 1992, Des Ryan from 2005 and Martin Kennedy from 2016.

Active players
An active player is considered to be a player who has played at least one game per month in the previous 6 months according to recent data from the IRFU (2019). Interestingly, there are actually a limited number of male players who play the game regularly in Ireland. In fact, it is clear that this population playing Rugby Union is significantly lower compared to each of the following team sports: Gaelic Football, Hurling, Soccer and Hockey. The 2019 reported numbers for ‘active’* males from age 18 upwards is 11,328.

Where players come from
Players that go on to represent their country seem to come from key schools as they transition through the provincial sub-academies and academies to the professional game. Typically between 70% and 85% of players who represent Ireland graduate upwards from these key schools. The close link between schools and the academies and their outreach regions (mainly clubs) in particular seems to be the true ‘key’ in the pathway of development. For example, the Leinster sub-academy has what can only be considered an outstanding conversion rate of 85% to the professional game. Of significance is also the fact that approximately 65% of the current Irish international players come through the Leinster sub-academy spearheaded since its founding by Dave Fagan. While this is a great tribute to the work of Dave and his colleagues, it does highlight a possible gap in other development sections. Once addressed they can also contribute to a greater extent to the development of elite players.

Performance/Results
As noted one simple criterion used to assess the effectiveness of the pathway of development is to assess Ireland’s performances or results within the Six (formerly Five) Nations and European Cups since 1990. In doing so we see that Ireland’s highest place finish in the Five Nations during the 1990s was a 3rd place. See Figure 2 below. 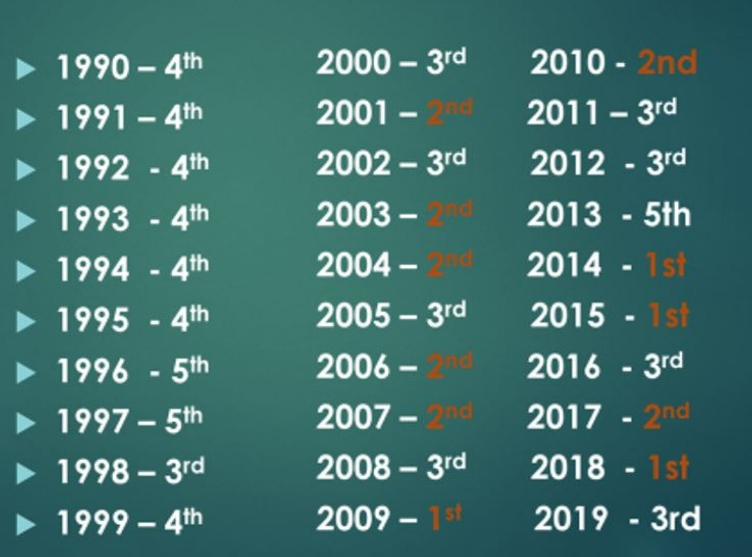 Note when we examine the total success of both the provincial and national teams we see that, with the exception of a few outstanding provincial achievements in the 1990s, Ireland’s success internationally was limited (as per the Six Nations). Notable exceptions were Munster’s win over the then World Champions Australia in 1992 and Ulster’s seminal victory in the European Cup in 1999. In 1998, Ireland under 19’s also claimed a world title and the team members and staff of this victory were to become key in the later development and success of Ireland and indeed the provinces. Figure 3 is a noisy one, yet it summarises the successes of the provinces and the national team from 1990 to 2019.

Longevity
Of all the markers that can be used to assess the effectiveness of a development pathway, a player’s longevity at the highest level of the game is one that reflects a more holistic reference that combines several important yet often unappreciated demands on the player. The factors that we have seen that impact on the years spent plying their trade include their early period of development, their capacity to limit injury incidence, the management of their game number in any given year, their lifestyle approach and their, would you believe, sleep quality/duration.

Several other factors such as fitness levels and physical measurements such as stature, body weight, and body fat were considered. Also included were other markers associated with mood. The surprising outcome however was that the single biggest contributor to a long career was the years devoted to physical development before starting on a professional contract. We call this ‘Training Age’ and this seems to be one of the main factors in influencing and impacting the longevity of a pro player in Ireland. In simple terms, the more years spent under a supervised fitness specialist such as a strength and conditioning coach, the greater the possibility of having an extended career as a player. 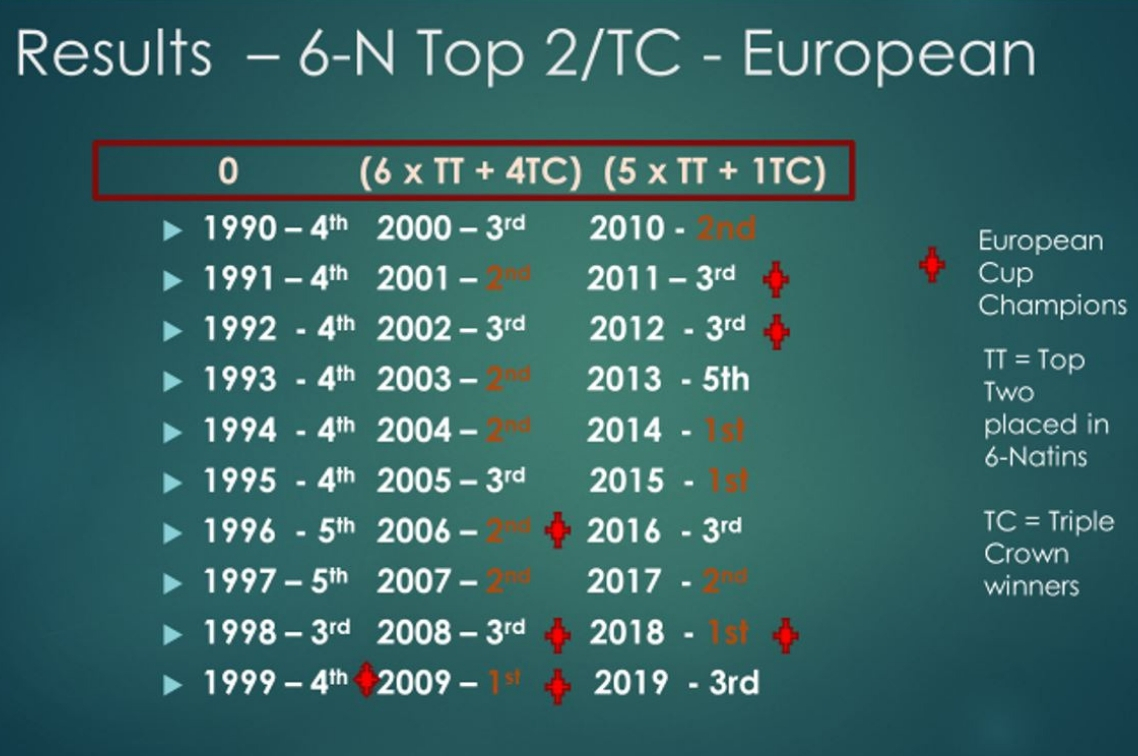 Workload
One other major finding, and one which will raise some eyebrows, is that it seems that those players who completed a higher workload in the late teen years and in their early 20’s seem to have also gained an advantage in terms of their capacity to endure a career in the professional game. While this is not the first time that we have found this ‘paradoxical’ relationship between workload and performance (Hogan and Jordan 2016), it is one which will no doubt prompt discussion as to how much work is required during the development stage to become a robust player in team sports.

Game Management
One key ‘qualitative’ factor that is present within Irish Rugby and not elsewhere to the same extent is the emphasis on restricting player game numbers to less than 30 games per year. This protocol started in 2003 and has played a key role in ensuring that each player has a definite off-season, a 10-week pre-season, and is thus able to attend to recovery and development in the pre-season.

Continuity and Succession
Crucial to the success of the LTAD model is having staff that stay and work within the pathway. For example, Dave Fagan was involved with the senior squad in Leinster for 10 years, he then moved to set up the sub-Academy in Leinster. This very experienced S&C coach was now going to ply his experience at this most important level of player development. Dave is still managing the sub-Academy physical development pathway and both, Leinster and Irish Rugby have a lot to be thankful for his constant presence. However, herein lies a most important lesson. What steps are in place for his succession given his phenomenal work over 22 years? Thus, succession planning is a key element in evaluating a pathway.

System Alignment
Again, from a more qualitative analysis, it is clear that the integration of education into any pathway is essential if there is to be sustainability in the pathway. This includes education that is aligned – i.e that there is a reference and connection with what is taught or explored within each area.

Principles are similar and an example of that is that all education should focus on player welfare as well as progressive development. This means that for technical and tactical coaches their continued professional development aligns with what the strength and conditioning coaches are completing. Furthermore, dovetailing these programmes with support from and within physiotherapy, medical support and nutritional education is also essential. Central to all is the application of technological support into player welfare, which has substantial potential to ensure better welfare and can add to the effectiveness of the pathway.

Practically, the coaching levels overseen by Stephen Aboud, and later by Colin Moran, were aligned with the Certified Conditioning Coach education programme. The latter has now certified over 1400 coaches within Ireland since its first launch in 2003/4. This programme is also aligned with World Rugby’s principled-based approach to coach education. World Rugby, through Setanta College, delivers a Level 1 and Level 2 S&C education programme through blended learning and face to face workshops. To date over 55,000 coaches worldwide have completed the Level 1 course.

Summary
The development of the Irish Rugby player over the last 3 decades was initiated by Stephen Aboud, who is now the Italian Rugby Technical Director. He and his colleagues within coaching, fitness, physiotherapy, and nutritional fields guided this development pathway long before a formal staged pathway (LTAD) was popularised in the 2000s.

In assessing the evolution of the pathway it is clear that Ireland has benefitted significantly from this early phase of player development. It may surprise many but there is still a limited number of schools who literally produce the majority of Ireland’s players.

From this structured development, where training age is increased especially from the junior stage through to the final secondary school year, players then transition to the sub-academy within the provinces. These academies are arguably the most productive academies in the world of team sports. There are still opportunities to forge a more effective development pathway, mainly through continued and greater support of schools, (sub) academies, and more focused support of clubs at all stages of development. Nevertheless, the current synergy between schools and academies is seen as a world-class development pathway, regardless of the limitation in player numbers.