A Sport on the Rise

With over 190,000 registered members (a number that is growing every day), Ladies Gaelic Football is the largest participation sport for females in Ireland. The profile of the sport has also been growing, as over 56,000 people attended the 2019 All-Ireland final, the largest-ever attendance to date for Ladies Football. TV viewership also soared with over 666,000 tuned into TG4’s coverage of finals day, a rise of more than 70,000 viewers from the 2018 Ladies Gaelic Football Final.

As participation and viewership has risen, so too has the standard of play. The pace and intensity of the game has been increasing steadily over the past ten years. Players are faster, fitter, stronger, more mobile, and more skilful than ever before and standards have been noticeably higher year on year.

A young minor player progressing to a senior inter-county team now faces a huge increase in training load and intensity. Developing a good foundation in strength and conditioning at underage level can help them to cope with the increased training load, with injury prevention, and to achieve their full potential as footballers.

The Demands of the Sport

To design an effective programme for the teenage athlete, we must understand the demands of the sport and the particular needs of the female adolescent athlete.

Unfortunately, there is a dearth of information related to the match-play demands of Ladies Gaelic football at senior level, with even less available for youth level. To help us design appropriate training programs at this time, we must rely on other similar field games.

During childhood, boys and girls follow similar rates of development in growth and maturation as strength, speed, power, endurance, and coordination develop at comparable rates. Consequently, both boys and girls can follow similar training programmes during the pre-pubertal years. This should focus on a broad range of fundamental movement skills and sports specific skills. However, differences begin to emerge at the onset of the adolescent growth spurt for nearly all components of fitness, with males making greater gains in most physical attributes.

Typically, the onset of the adolescent growth spurt occurs around age 10 for girls and about age 12 for boys, although this will vary considerably between individuals. PHV describes the period of time in which an adolescent’s rate of growth is at its greatest. Generally, girls experience peak height velocity (PHV) at an earlier age than boys (12 years versus 14 years). After this time, there are significant differences in almost all aspects of physical performance when comparing males with females.

We examine these differences below: 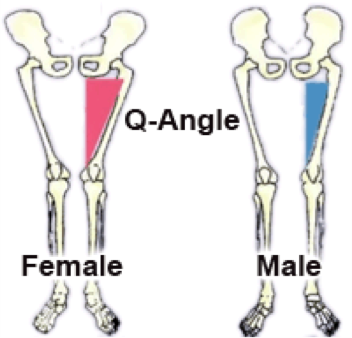 Importance of Strength for Female Athletes

Developing muscle strength should be seen as an important component of youth strength and conditioning programmes not only to improve performance but also to reduce the risk of sport-related injuries. However, strength development sessions should not merely be viewed as an addition to a young athletes’ training programme but as a replacement for another form of training e.g. pitch session. 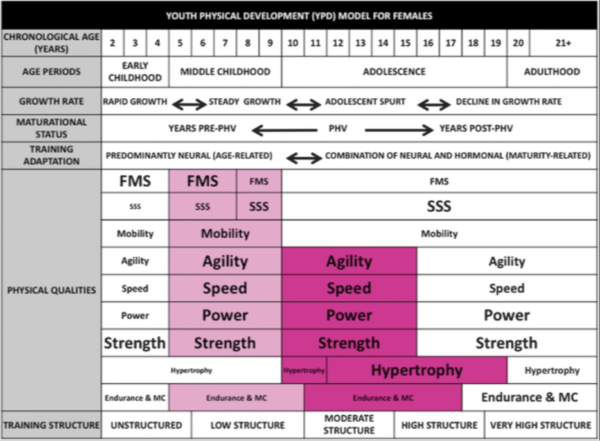 So, given these differences should female adolescents train the same as males?

Broadly speaking, yes, as the muscle groups and energy systems involved in a particular sport are the same. Training programmes should be designed towards improvements in the qualities needed for successful sport performance. However, the anatomical and hormonal differences that do exist mean that when planning a programme for female adolescent athletes, there are some issues that need to be considered.

Some of these considerations include:

As youth S&C coaches, our role is to prepare our players physically for the transition from youth to adult football. Often, our talented inter-county players train with multiple teams and indeed across multiple sports. Without the intervention of a sound strength and conditioning program to complement and support the player through maturation and sport participation, we leave our youth athletes open to two problems. These are overuse injuries through sport, in addition to underdevelopment through lack of strength & conditioning.

Therefore, it is imperative that a developmentally appropriate, long-term programme of athletic development takes place during the teenage years to enable a smooth transition from youth to adult Ladies Gaelic Football.

Learn more about the courses offered by Setanta College here, or contact a member of our team below.

About the Author: Teresa Molohan

Teresa is a Setanta College graduate and has been a tutor with the college since 2015. She is a Certified Strength & Conditioning Specialist (CSCS) and holds an MSc in Strength and Conditioning from Limerick Institute of Technology. She has an extensive background within Gaelic Games and currently coaches in a full-time capacity at all levels from underage through to senior at schools, club and inter-county level. In addition, Teresa is qualified as a Level 2 Sport Ireland Coach Tutor with the LGFA & GAA and has assisted in the development of the LGFA Level 2 coaching course and Athletic Development course.