Greg Bennett: The Pre-Season Puzzle – How Do We Fit All The Pieces Together?

Greg Bennett: The Pre-Season Puzzle – How Do We Fit All The Pieces Together?

As coaches, how do we plan our training so that our teams get the most from it? This is a question many will have asked themselves as they plan their pre-season training periods. Many GAA and soccer pre-season schedules are now underway, and within this blog, we will take a look at some of the key areas we need to consider to get the most from this busy section of the season.

Traditions
When it comes to training, traditions are valuable and have their place but when we look at traditional approaches to pre-season training in many GAA settings, for example, we see outdated methods within a large number of the training systems employed. A common occurrence is for players to have an end of season break ranging from 4 to 8 weeks (depending on the length of their season) and to resume pre-season training having completed little or no training during their break. On their return to pre-season, what ensues is a host of extremely challenging training sessions over the first few weeks in an attempt to “get fit” in time for the new season. Here we encounter the first problem in many pre-season plans – a huge increase in workload over a very short period of time. 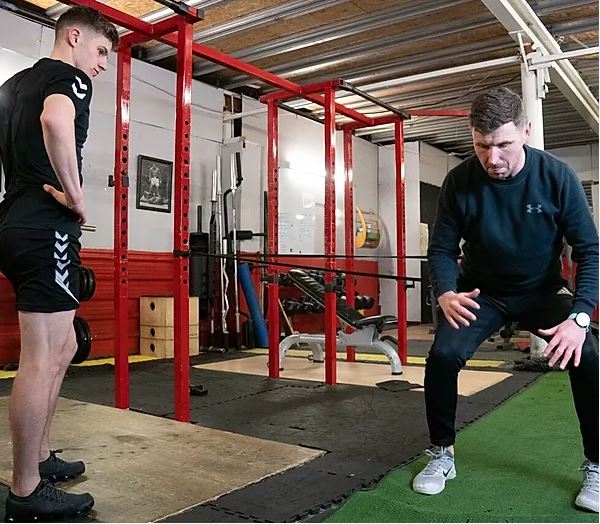 Coach Greg Bennett demonstrating exercises to his client in a training session.

S&C coaches will be familiar with the concept of progressive overload and how the balance between volume and intensity must be monitored closely in order to achieve the best possible physical outcomes for players. However, when we overload players too early with high volumes of running, for example, injury incidence will rise. A consistent and progressive overload will bring about more measured improvements in fitness and allow the player to manage the workload.

Quality vs Quantity
Tied in closely with this issue is the overriding feeling amongst many managers that players must be in peak physical condition for the first game of the season. One of the aims of the pre-season is to prepare players for the demands of the entire season and not just the opening game. Why not extend your traditional pre-season period into the season itself and rename it Training Phase 1? Is the first game the most important game of the season? Is it vital that everything is right for this game? Is it worth cramming huge volumes of work into a 4-6 week period just so your team is fitter than the opposition in that first game? A desire to win games is completely understandable but there is a better way to complete the pre-season and, in the process, become a ‘fitter’ and more efficient team for the duration of the season. To shed more light on this we must look at how we decide what are the most important areas of focus in our training.

Key Areas
To solve the pre-season puzzle we need to go back to a simple analysis of the demands of the game to select what areas are most deserving of our focus in this period. Often, we associate the pre-season with the development of the physical attributes, namely, strength, speed, endurance, robustness etc. The difference between the pre-season and in-season periods is that we can afford to give more time to the physical development of players in pre-season and not have to contend with the pressure of upcoming games of importance. We can also afford to accumulate some fatigue during this period whereas in the in-season period fatigue will be our enemy. However, a common error is to focus too much on the physical components to the detriment of what should be the number one area of focus during the pre-season: the game itself. Improving the ability of your players to perform the technical and tactical elements of the game should be the main focus of your training as you want them to be able to successfully execute these skills in game situations. A player’s game understanding (tactical) and technical ability will be crucial factors in determining the outcomes of your season. Creating a training plan that balances the physical elements with the technical and tactical is the key to solving the pre-season puzzle. 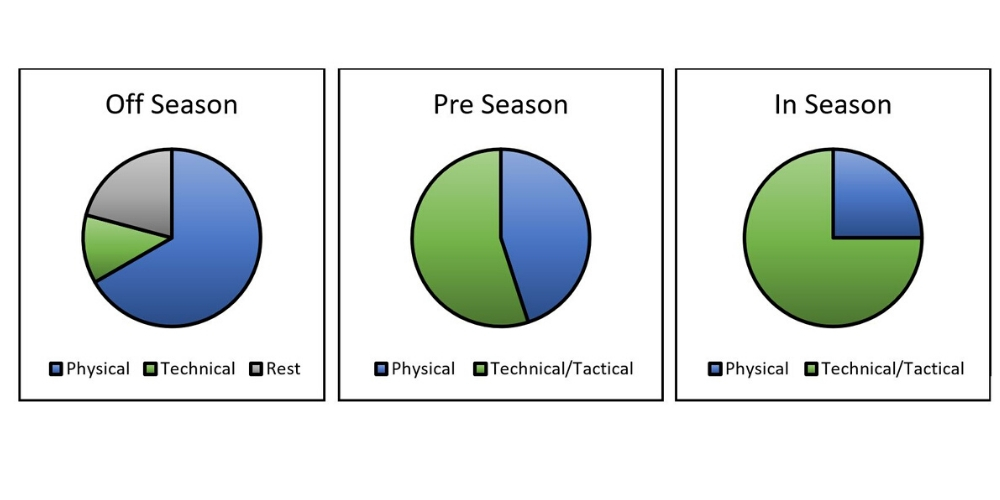 Pieces Of The Pie
If we imagine the overall training plan, including physical, technical and tactical elements to be parts of the performance pie, then we can begin to divide what amount of training time we want to devote to each area. In the off-season, some complete rest will be required after long seasons, however, some general conditioning can be included here as a break away from the game and also to maintain a solid fitness base. In the pre-season, whilst keeping the game as the number one element in training, we can still have a distinct focus on the physical development of players. This can include strength training, on-field conditioning, robustness exercises and even focusing your small sided games more towards conditioning based goals.

As we move through the training phases, notice how the focus can shift for each area of training, yet all remain in the training plan to provide a stimulus. As the season progresses physical capacities should have increased and reached a level where they may not need to be focused on within separate sections of the training session. Regular matches and training should be a solid stimulus for maintaining conditioning levels unless players are returning from injury and may require further levels of conditioning work. Another exception here may be strength training which is often discarded after the pre-season period but should be kept in the overall training plan with volume managed.

Be first to the ball
Finally, it is worth viewing all of the physical elements we try to develop as part of an overall goal of being “first to the ball”. Some examples include how:

Framing strength and conditioning practices in this way help to create a clearer picture in the mind of the sports coach as to why these areas may need to be developed further and meanS your pre-season training goals can be well communicated to players and management. Remember, it is still just one section of the season but it makes sense that players who complete well planned and progressive pre-season periods are more likely to have injury-free seasons and stay on the pitch where they can make the impact we want them to.

About the Author: Greg Bennett

Greg Bennett is currently a Secondary School PE Teacher based in North Dublin. Greg has completed the PFCS and BA in Strength & Conditioning with Setanta College and has worked as an intern with NADA (National Athlete Development Academy) based in Dublin. Greg has worked with several underage hurling teams including the Dublin Colleges Hurling team and is still playing senior hurling with his own club, Raheny. He also played Inter county hurling with Dublin for 4 years from 2006-2010. Greg is currently completing an MSc in Sports Science (Strength & Conditioning) through St. Mary’s University in London. He is also UKSCA and FMS qualified coach.